2020 Brings the JRPG Renaissance into a New Decade 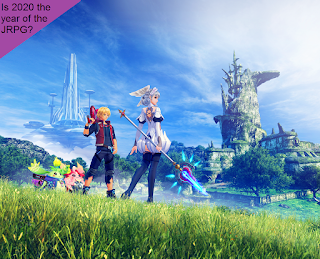 Ever since Xenoblade Chronicles' release in 2011, JRPGs have entered a sort of renaissance. Building up with the quality and releases reminiscent of the SNES and PSX 90s titles, this past decade brought forth many new wonderful gems. Among these include Persona 5, NieR: Automata, Dragon Quest XI, and Fire Emblem: Three Houses just to name a few!

As we enter the new decade, however, several games will continue that renaissance in just 2020 alone. Two of them already released with several more coming later this year!

The first released was Persona 5 Royal, an updated release to the 2017 title and winner of RPG of the Year at The Game Awards. Not just a straight re-release, Persona 5 Royal offers numerous gameplay upgrades from its original version. While largely the same otherwise, this version expands greatly upon the story with a new character: Kasumi. The best way to explain it would be that it's what games like Pokemon Yellow and Crystal are to Persona. Imagine a quality of life upgrade with new story content.

In other words, if you've beaten it the first time, you don't really need to beat it again unless you're looking for a reason to. But if you've never played Persona 5, then Royal is the way to go. This souped-up version of the game presents one of the greatest RPGs of all time with a wealth of new content not previously seen. In this case, it is an absolute must for PS4 owners. But as for those sitting on the fence, you can check out this guide of changes to see how much Atlus added to P5.

Most recently was the release of Final Fantasy VII Remake, a full re-imagining of the 1997 PlayStation classic. Final Fantasy VII Remake is, as mentioned earlier, more of a re-imagining. Rather than upgrading the game's aesthetics, it's a full-blown retelling released as a completely new title. This massive upgrade features some of the most beautiful visuals seen this generation. New features include the real-time battle system, full-voice acting, and some seriously in-depth boss battles. While we have not secured the full game upon its release, you can read our demo preview here to learn more about what to expect.

Later this year, Nintendo will release Xenoblade Chronicles: Definitive Edition, a remake of the 2011 Wii title that helped start the JRPG renaissance. While labeled as a remaster, this version will feature upgraded, HD visuals and all-new character models. You can see them in action below in the announcement trailer.

Xenoblade Chronicles: Definitive Edition will features a new story mode not present in the original Wii title or its 3DS port, so there is something for those who beat the original version already.

2020 is already showcasing several massive titles, including remasters, remakes, and sequels alike. We look forward to sharing more news with you as each game's release dates get closer. Stay tuned to The Geek Getaway for more JRPG action. Which game excites you most? Are you hoping for an announcement later this year? Let us know in the comments below.