What to Expect from the Final Fantasy VII Remake Demo

Flash-forward to nearly a decade later, and Square-Enix developed a trailer to showcase the PlayStation 3. You would think Square-Enix has better things to do than tease its fans with a tech demo, right?


Despite the wait, this remake has truly come into fruition 15 years later. What started as a tech demo grew higher in demand over time. After waiting for over a decade and a half, what this demo has so far showcased is that the wait was well worth it compared to what we saw back in 2005.

Final Fantasy VII's demo takes place in the opening of the game, the Bombing Mission. As Cloud, you're a mercenary armed with a massive blade. Joined by your employer, Barret, and his fellow AVALANCHE members, you'll destroy a Mako reactor to save the planet. The reactor drains energy, or Mako, from the Planet. Your job is to defy the government and blow the thing to bits. 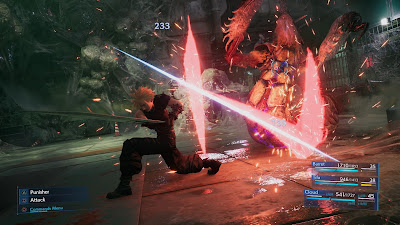 During your course through the Reactor, you'll experience combat against armed guards and machines. In the original FF7, you would play a traditional turn-based JRPG experience. While the option to play a more traditional turn-based method was included in this game, the Normal mode will grant you the true, defining experience. Rather than simply go back to the original formula, Square-Enix sought to define a brand new battle system. You'll control Cloud in real time, swinging his Buster Sword to attack while opening up a command menu to unleash Magic or powerful abilities.

Perhaps most defining is the new Mode switch ability. You can either make Cloud mobile or you can press Triangle to make him attack in a Punishing Mode. Doing this will change his attack animations as well as boost his damage significantly. 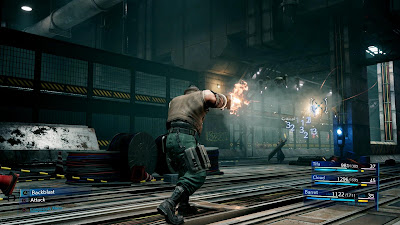 While in battle, you'll block attacks or dodge roll away. You can also switch party members on the fly. If you don't want to play as Barret, you can also have him use commands using L2/R2. Unfortunately, I found that he tends to take his own action as soon as his ATB (Action Time Battle) gauge filled up. This means you might be better off switching to him. Since he has Thunder magic, he'll be more useful against machine enemies.

Speaking of enemies, the boss fight against the Guard Scorpion is completely reworked. No longer is it just an easy machine you can beat down. It fights in several phases and forces you to use the environment to your defense. You must block attacks, target its shield generator, and aim magic attacks at it while attempting to stagger the machine. I should feel embarrassed for the number of healing items I spent while trying to fight it.

With that said, Final Fantasy VII plays similarly to Crisis Core: Final Fantasy VII, a PSP title released in 2007. However, it feels much faster and far more advanced than the prequel title, flowing with modern-day quality of life improvements. You get more reward out of strategizing attack patterns against your enemies and destroying parts of the environment as well.

I spent plenty of time mashing the Square button to slash away enemies and boxes alike. It feels incredibly satisfying watching Cloud attack. It takes a bit of adjusting to get used to the menu, however. It might take a bit of getting used to before you memorize your Attack buttons and your Commands, which let you use Items, Spells, or Abilities. 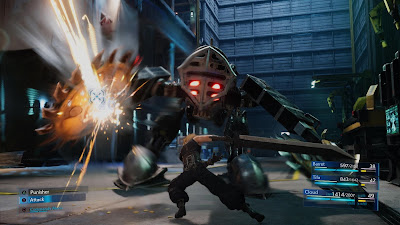 Plus, while you're battling, nothing feels quite as blissful as hearing Final Fantasy VII's beautiful melodies remixed. Hearing "Bombing Mission," "Let the Battles Begin," "Fight On," and more being played again brings harmony to the player and accompanies an already stellar first impression. Nobuo Uematsu fans will relish hearing his compositions once again.

It doesn't matter if this is your return to Midgar or your first time playing the game. From the demo experience, this plays like an incredibly solid Action RPG with smooth animation, gorgeous visual effects, and even some challenging boss battles that open up a new dimension in how you engage enemies. Be ready to save the Planet when Final Fantasy VII Remake comes to PlayStation 4 on April 10, 2020.

Have you played the original Final Fantasy VII before? What was your fondest memory? Let us know in the comments below!