As I recently finished Resident Evil 7's main storyline, I decided to try the DLC episodes as well. If you haven't yet, I invite you to read my review on the main title before continuing any further. With that being said, I'll cover two DLC episodes: Not a Hero and End of Zoe. Please be mindful of the spoilers ahead. 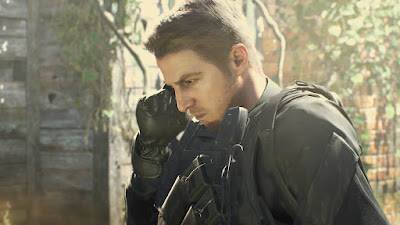 Not a Hero stars BSAA agent, Chris Redfield, in a mission to arrest Lucas Baker. Taking place shortly after the end of the main game, Chris enters the Salt Mines, near the Baker Estate, to track down the maniacal psychopath and rescue his captured men. Moreover, Blue Umbrella, the organization working with Chris, believes that Lucas is tied to The Connections, which includes those involved with the E-Virus, which mutated Eveline and began the game's crisis.

As Chris, you'll quickly notice several fundamental differences from your main playthrough as Ethan. For starters, the UI looks greatly different. Your health meter is located on the bottom left. Additionally, you'll also wear a helmet. This is used for filtering out areas with infected gas as well as gaining night vision support. 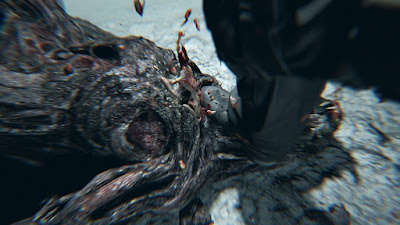 Perhaps the most striking change includes the combat and overall tone of the game. Unlike the creepy, quiet survival horror approach of the main game, Not a Hero feels more akin to Resident Evil 4-6's action-packed energy. You begin the mode armed to the teeth and you even have Chris' signature melee finishing move from Resident Evil 5. Stun a Molded with your weapons and you can punch its head clean off. New to this mode are calcified Molded. Impervious to normal weapons, you'll have to track down special ammo to kill them. Using Grenades, to stun them, and strategically moving past them becomes key to survival.

Once you encounter Lucas, you'll engage him in a boss fight. What makes this fight special is the form he takes as well as the type of fight you're battling him in. Hulking brute monster, with several forms of attack, gives the player vibes of the familiar Tyrant battles from past titles as well. This mode feels like a major nod to past Resident Evil games, neither forgetting its survival horror roots nor its more recent energy as well.

The playthrough will tie up loose ends and give you a great detailed explanation on Blue Umbrella, Chris' mission, as well as Lucas' twisted depravity. One thing I loved is the thematic behind the name "Not a Hero." When you comprehend the stress Chris is under and what he can't do, the title becomes clear. Once you clear the DLC episode, you'll gain access to more weapons and a harder difficulty to play through. 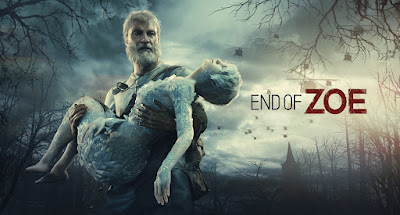 The second DLC, End of Zoe, features Joe Baker, Jack's brother, in an attempt to rescue his niece, Zoe. The beginning features Zoe being calcified by Eveline, but found by Blue Umbrella agents. As Joe encounters them, he interrogates the agent's involvement and attempts to rescue Zoe.

Unlike any other mode, this features barehanded fighting. You'll engage Molded using boxing techniques, spears, and bomb traps. You'll procure no firearms during this mission. But you will beat down Molded, throw spears through Gators, and engage against a powerful enemy from Joe's past.

Once again, this will bring forth new storyline subjects to the game, bringing closure to Zoe's story. Moreover, you'll also unlock more extra weapons and difficulty modes when you clear it, adding to the replay incentive. However, keep in mind you'll likely finish both DLC campaigns within 2 hours each. 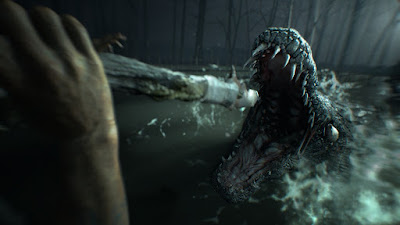 When it was all said and done, I found both campaigns to be quite enjoyable. They spin the Resident Evil 7 formula in their own way. End of Zoe simply reminds me of Resident Evil 4's Mercenaries mode. It's not scary, but full of action and creepy enemies. Using fisticuffs feels akin to how everyone in Mercenaries used different weapons, particularly Jack Krauser's use of the Bow and Knife. New ways to play the game, the new level designs, and more disgusting enemy types bring out even more life in an already fantastic game.

My only real problem, however, is the price tag on End of Zoe. While Not A Hero can be downloaded as free DLC, End of Zoe currently costs a whopping $14.99 on PlayStation Store. This costs only $5 less than the main game itself at the time of this writing. Furthermore, purchasing a Season Pass costs $29.99, which means you'll pay even more than the full game's current price.

My personal recommendation would be to invest in Resident Evil 7 Gold Edition. Otherwise, waiting for the End of Zoe DLC to drop in price would be the wiser move for those who already own the game. I cannot justify dropping $15 on a DLC episode that can be cleared in under 2 hours. This isn't Dark Souls' Artorias of the Abyss DLC.

With that said, definitely play Not a Hero to wrap up one major part of the game. Wait for the price drop or just go for End of Zoe if you're really seeking to finish the storyline. Either way, I recommend playing through both modes as they make for solid narrative with some fun gameplay to go with it.

*All images courtesy of Capcom USA