*The Geek Getaway received a review copy of Langrisser I & II

Langriser I & II, developed by the Chara-ani Corporation and published by NISA, releases in the US on March 10, 2020. Three days later on March 13, 2020 the game will be available in the European market. You can pick up Langrisser I & II for PS4, Switch, or PC via Steam. The physical copies are listed at $49.99 but there is now word yet if the digital versions will cost the same price. The official website for the game lists DLC as coming soon but as of writing this review we have no idea what it is or how much it will cost. 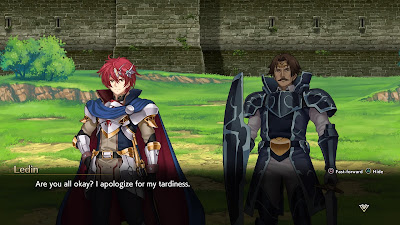 Langrisser I
The first game in the series tells the story of Prince Ledin of Baldea. You follow him on a journey that starts with a dramatic escape of a besieged castle all the way to a battle between the forces of good and evil. Along the way you recruit a number of characters who swear allegiance to your cause and wish to keep the magical sword Langrisser from awakening the ancient evil known as Chaos.

The plot is pretty straight forward and full of things that are now cliche but were pretty unique at the time. Older gamers will see plot twist coming from a mile away but younger players might be in for a shock or two. Gamers who only played the US version of Langrisser, Warsong for the Genesis, will be in for quite a treat as the story is expanded quite a bit in this remaster. 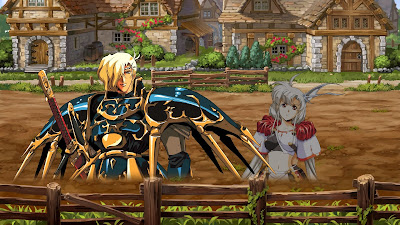 Langrisser II
Taking place hundreds of years after Langrisser I, this game casts you in the role of Ledin's decedent Elwin. The Baldea Kingdom having fallen before the start of the game, Elwin is a wandering swordsman looking for the person who killed his mentor and friend Doren. Due to the way Langrisser II is structured with multiple paths, the identity of Doren's killer may or may not be discovered in your playthrough. Additionally, there isn't a simple plot synopsis due to this multi path structure. The best I can do is say Elwin and his rival Leon are searching for Langrisser and its opposite Alhazard in order to stop or bring about the destruction of the world. 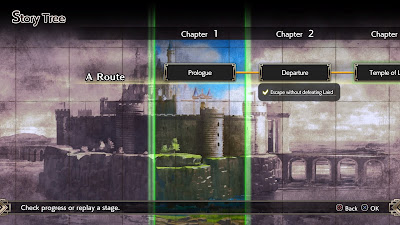 The use of branching, conditional paths is still pretty cool and allows you to take the story into a few unexpected places. Like its predecessor, a lot of the game will feel cliche to older gamers but offer something fresh and new to younger players. Veterans of the Langrisser series will also find a few new things to discover as this remaster adds some content to the story. 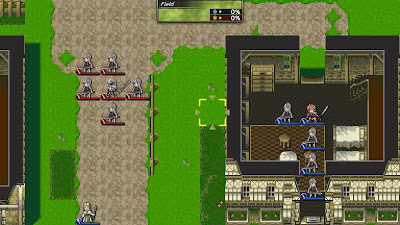 Both titles in this compilation play identically. Each stage sees you in charge of a set number of commanders and their hire mercenaries. You can choose from the unlocked mercenary classes or allow the computer to auto select which units to bring into battle. You then face off against an opposing army in tactical warfare similar to the Fire Emblem series. Permadeath is not a thing in either of the games in the remaster so you don't have to worry about trying to win with all your units intact. 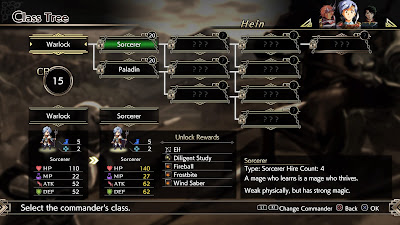 Commanders can be strengthened in a number of ways, the most obvious is through equipment you find on the map or buy from the shop. Commanders can also be promoted, when they have the necessary Command Points, to more powerful classes. These promotions may come with additional mercenary types for that commander, new spells, and new skills. Skills are bonus attributes that you can assign to each commander. Each commander can only have 2 skills so you need to choose wisely to build the commander of your dreams. Ledin and Elwin both get bonus skills, and different starting equipment, based on the answers to the questions from the goddess Lucilis at the start of the game. 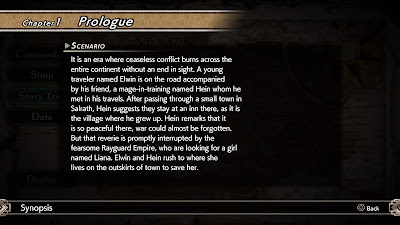 When starting a new game you are asked if you want to play it with or without Easy Start. If you choose to play in Easy Start then you get some additional equipment and command points. The game is already pretty easy as it is, so there is no need to use Easy Start unless you are just terrible at these kind of games. It should be noted that you will not be given pre-battle synopsis unless you actively press the button that prompts them. Their isn't any information that is need to know in order to play the game, but it interesting for those interested in the lore of the game. 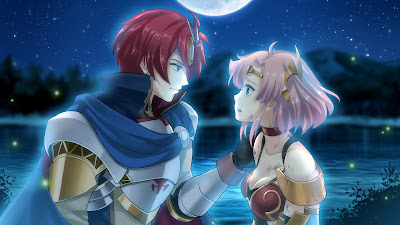 The music and voice acting in this compilation is top notch, with neither becoming annoying or overused. That said, the non Japanese speakers may feel the voice acting doesn't add much but I still like it. The remastered art in this compilation is really god but also sort of generic in some regards. The female characters see vast improvements in their art while a lot of the males are drawn more subdued in this version than in previous iterations. 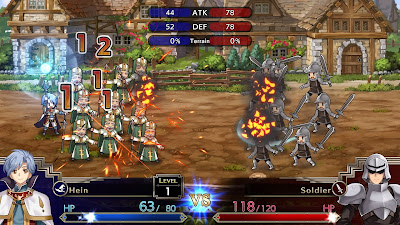 You can choose between 4 different art options for the game so if you like the classic portraits and maps you can choose Classic. Remastered is obviously all remastered style art. Classic Map gives you classic maps with remastered character art. Classic Characters swaps this around with classic character art and remastered maps. You should be aware that Classic and Classic Characters do not provide classic character art for generic enemy commanders or art images. The battle animations and on map sprite also remain in the remastered form regardless of the art setting. This is my only gripe with the classic art settings, as the mix of remastered sprites and battle animations really makes it feel like a rushed extra thrown in.

Final Verdict: Recommended
Langrisser I & II features 2 great tactical RPGs that offer a lot of bang for your buck. The ability to go back and grind maps, tho only with commanders from those maps, is a nice feature that really shines in Langrisser II due to the aforementioned branching paths. The New Game+ feature is also great for running through the game as a beast. Crushing the enemies in the first battle of Langrisser I with a maxed out Ledin feels awesome. There are some minor gripes and the game is a bit too easy in some regards but solid gameplay and a good story will have you coming back time and time again.

What are your thoughts? Is Langrisser I & II something you are looking to pick up when it releases? Leave a comment below and let us know. Also, enjoy some additional screenshots comparing the Remastered and Classic styles.