NOTE: NIS America provided the review key to The Geek Getaway for this review.

When most people play games, it's to escape reality and be something they wouldn't be in the real world, because reality and all its flaws usually aren't as exciting as fantasy. However, our reality is a world we must live in, and some reality-based games can be insightful and compelling if done well, and Disaster Report 4: Summer Memories is based on a very serious question: 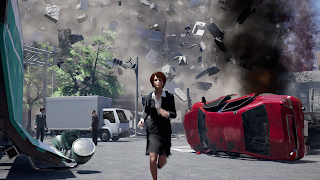 "How would you deal with being trapped in a crumbling city during an earthquake?"

From this premise, you can choose to be a male or female character (that you customize the appearance of prior) who is visiting Hisui City in Kanae Prefecture of a fictional (though based off real places) part of Japan for whatever reason you choose (and you get to choose one of several). While there, a severe earthquake rocks the city, ruining your plans for visiting, replacing them with something far direr: the need to escape and survive. 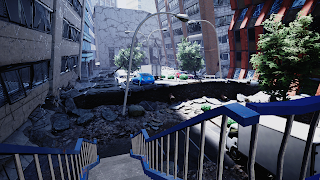 The game blends several interesting ideas. Using the attempt at realistic portrayals of actual real-world Japanese locations like the Yakuza series (or close approximations in this case), the adventures and puzzles (though not the combat) of Resident Evil and Silent Hill (albeit rendered in a more real-world plausible context), and scenes right out of an earthquake survival documentary, we get a game where you are given the freedom to do what you must to survive and escape.

On top of letting you explore several areas, you are given the option to be anything from a kind soul who helps others survive along the way to a ruthless person who only worries about saving themselves. Alternatively, you can be anything in between or be utterly schizophrenic how moral and immoral you choose to be while interacting with those in the disaster area. While the game keeps track of how moral and immoral you choose to be and it will affect later scenes based on earlier conduct, there is no wrong choice, survival is based on the player's interpretation of what they need to do to survive, and that could involve making pragmatic choices as opposed to moral ones or not, how you conduct yourself is up to you. 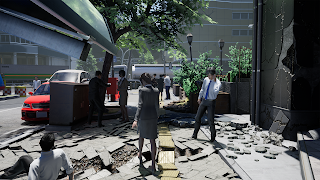 The game also reminds the player repeatedly they are NOT a superman or able to survive fatal incidents that would kill and maim in real life. You must eat, drink, rest, take bathroom breaks, and attend to injuries you incur. You are not able to take a lot of damage, keeping in line with the logic this is based on reality, so careful gameplay is essential to navigating a city of aftershocks, busted gas and water lines, and cut power. The quake damage can also cause buildings and other objects to fall at any time, meaning quick action to avoid and reduce the risk of injury or death is a constant concern.

There are some fun things, however. Your appearance, clothing, and various accessories like your compass and backpack can be customized by finding different clothes and accessories, and exploration is encouraged and rewarded. The backpacks can also increase or decrease storage for found items, adding another incentive to hunt them down. Further, some game scenes play out like a choose-your-own-adventure book, letting you decide how those scenes make you feel and what your personal and moral take on the situations at hand are. Overall, there is a strong element of "how would you feel and react in these situations" your character avatar can display.

On a technical level, this game uses the Unreal 4 Engine quite well. Physics and geometric detail are well detailed, with the city and people being beautifully rendered. There are some areas where the developers cut corners graphically (such are poorly detailed minor textures), though these tend to not be noticeable unless you go out of your way to look for them. The frame-rate is also less than 60 FPS, more along the lines of 20-30 FPS. This latter limitation, especially since I played the Switch port, seems to be a reasonable compromise to maintain stable frames and high detail for all the important stuff in the game engine. The music is sparse but nice, and the voice and sounds are very clear. Given listening for aftershocks and falling debris is a vital game-play element, this is very good news for the player.

It's worth noting this game can be quite tense and scary, and those who are claustrophobic will not be comfortable due to more than one instance of having to crawl for your life in very tight spaces where the fear being crushed is ever-present. The degree of realism in the presentation of earthquake damage and how they would affect various structures is such this game can serve an educational role for those who have never experienced such an event. Those that have are likely to get quite the deja vu. 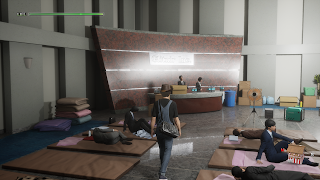 I usually play games because I want to be in a situation I wouldn't be able to experience in real life, but Disaster Report 4: Summer Memories is quite compelling because I very well could be in an earthquake someday. It never really crossed my mind how I would deal with that until I played it, but having done so, it's given me quite a bit of food for thought as well as a gaming experience I found unique and interesting.