Posted by Janus Julian on February 07, 2020
On the first Friday of the month, HumbleBundle releases it's "Humble Choice" selection of games to subscribers.

The time has come for February's choices to be released, so I'm going to go over the selection and see what, in my opinion, are the best choices to make for any given level of subscription.

I will also include how much you can possibly save on games through subscribing to either Humble Premium or Basic.

Available Games to Choose This Month 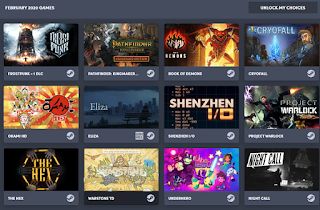 The first month of Humble Choice in December 2019 started off with 10 choices, while in Janurary it increased to 12 choices making it a bit harder of a choice for everyone (and actually bringing choice into the equation for the Humble Classic holders).  This month has 12 total choices as well.


(All prices are in USD and as of 2/7/2020)  (Multiplayer-focus and Early-Access will be marked)
(I'll be writing a quick blurb and linking to the store page for each game; more information will come up as it becomes relevant to my recommendations or choices)

2.  Pathfinder Kingmaker: Enhanced Edition  (Current Price: $39.99)
-Become rule of your very own kingdom.  Based on the Pathfinder Tabletop RPG.

3.  Book of Demons  (Current Price $24.99)
-A deckbuilding real-time hack&slasher in the theme of Diablo.

This is the plan you got if you were previously subscribed to Humble Monthly before they switched to Humble Choice; it gives you the largest number of choices (10), so a lot of times you're more deciding which games you don't want rather than which you do. 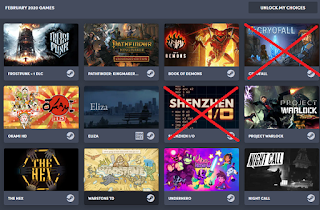 For my choices, I'm going to pass on Cryofall because it is multiplayer focused and I tend to prefer single-player.  I'm also going to pass on SHENZEN I/O since, while I do like puzzle games, I am horrible at programming.

It gives you the ability to choose 9 games out of each month's Humble Choice selection.


If you just want to get the biggest bang for your buck, currently the picking the following games will save you the most money if you were interested in all of them: 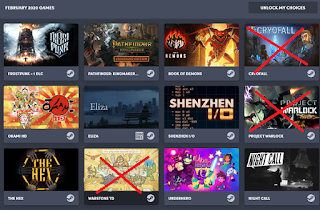 CryoFall, Project Warlock, and Warstone TD are currently the lowest-priced on Steam.


The difference between Classic and Premium is only a single game, so it shouldn't be too hard to figure out which I could do without.  I would probably settle on Warstone TD, as when it comes to Tower Defense games I tend to prefer them to be 2D.

If you just want to focus on saving the most money with your subscription, the following games will grant you the largest savings, you would want to pick Frostpunk (+DLC),

This requires the most thought out of all of them, so in addition to what I'd personally choose,

In the end I had to go for these:

I've been meaning to give Frost Punk a try as I'm very much into city building games, whether they're classic like Cities: Skylines or with survival elements such as Banished.

Pathfinder Kingmaker: Enhanced Edition has likewise been on my list; I own the original Pathfinder adventure modules that the game is based on, and it used to be a passion of mine to collect as many different rulebooks on running/building cities and kingdoms when I was more into tabletop gaming.

I've heard nothing but good things about Okami for as long as I can remember.  Although I never had the opportunity to play the game back when it was originally released, I am more than happy to now that this opportunity has presented itself to me.

So, that's a wrap until next month.  I hope that I was able to provide some useful information along with my personal opinions.  Lemme know what your choices were or would be!

*All pics courtesy of Humble bundle