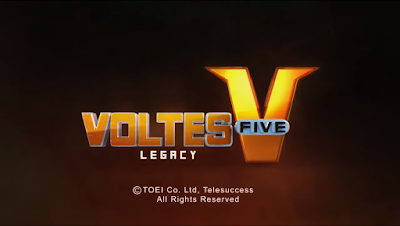 Voltes V(Voltes Five) was a super robot anime that aired in Japan from June 4, 1977 to March 25, 1978. It is the second in a trio of anime commonly referred to as the Robot Romance Trilogy. Voltes V, along with Chōdenji Robo Combattler V and Tōshō Daimos, helped elevate the super robot genre from simple cartoons aimed at selling toys, to actual anime aiming to tell stories full of drama and human emotion. Despite this, Voltes V only achieved moderate success in Japan. However, Voltes V would become a massive hit on 3 other islands. In Cuba, Indonesia, and the Philippines Voltes V achieved a level of success and cultural significance it never achieved in it's home island of Japan.

According to Wikipedia, the story of Voltes V is as follows...


An armada of horned humanoid aliens known as Boazanians invade Earth and launch their "beast fighters" all over the world, defeating most of the world's armed forces. The Boazanians first defeat from the hands of Super Electromagnetic Machine Voltes V brings the invaders to focus their attacks on Japan. Voltes V was designed by Professor Kentaro Gō (Doctor Ned Armstrong), his wife Professor Mitsuyo Gō (Doctor Mary Ann Armstrong) and their trusted colleague, Professor Hamaguchi (Doctor Richard Smith) and built by large scale construction effort backed by United Nations Earth Defense Force and General Oka (Commander Robinson). Voltes V is a robot composed of five "Volt Machines", and each are themselves formidable weapons. Each machine is piloted by Ken'ichi (Steve), Daijiro (Big Bert), and Hiyoshi (Little Jon): the three sons of Kentaro and Mitsuyo Gō, along with General Oka's daughter; Megumi (Jamie Robinson), and Ippei Mine (Mark Gordon), an orphan cowboy.


Voltes V's home base is Camp Big Falcon, a fortress situated on a bird-shaped island along the coast of Japan. Voltes V's enemies are the Boazanians; led by Prince Heinell (Prince Zardoz), Katharine (Zandra), Jangal (Draco), and Zuhl. The series focuses on the struggle against the Boazanian invaders and the Gō brothers' search for their long-lost father, Kentarō Gō. As the series progresses, four major characters — Professor Mitsuyo Gō, Zuhl, General Oka and Professor Hamaguchi — die. Zuhl and Hamaguchi are replaced by General Bergan and Professor Sakunji (Doctor Hook), respectively. Later in the series, the brothers learn of their unique heritage of being half Boazanian. The characters deal with their identity's impact on their own lives and that on both their close friends and bitter enemies.


In April of 1979, almost seven years after martial law was declared in the Philippines, Voltes V would become more than a simple Saturday morning cartoon to a generation of kids. In that month, dictator Ferdinand Marcos would issue a directive that banned Voltes V, and similar shows, due to excessive violence. This was a huge blow to fans of the show as the final five episodes hadn't aired yet. Although excessive violence was the official reason, and one Marcos' son Bongbong would defend in 2012, fans of the show speculated the real reason it was banned was due to its themes of rebellion and revolution. Two ideas Marcos did not want to put into people's heads.

After Marcos was ousted from power in February 1986, Voltes V would return to Filipino TV. GMA Films would even package and theatrically air the final five episodes of the series under the name Voltes V: The Liberation. Voltes V had come to represent freedom, peace, and lost innocence to a generation of Filipinos. This sentiment was eventually expressed by artist Toym Leon Imao in a sculpture called Last, Lost, Lust for Four Episodes. The sculpture was displayed in front of the Palma Hall at the University of the Philippines Diliman from September 20, 2014 until September 28, 2014. The full story of the sculpture is quite interesting and you can read it here.

With all this cultural significance behind Voltes V, it was a big treat for the Filipino people to see GMA release a teaser trailer for a live action Voltes V series called Voltes V Legacy. Thanks to the YouTube channel Voltes V The Documentary, you can see that teaser trailer below. Fans of Voltes V are both excited but cautious about the new show due to GMA's handling of other properties. In my opinion the CGI looks decent but after reading some comments I doubt the show will have the same quality of the trailer. What do you think about the teaser trailer for Voltes V Legacy? Do you want to see a English dub of this show?