Doctor Who had its Season 12 audience score disappear, but it was far from alone in this

Posted by TonyTGD on January 12, 2020
Fans noticed something odd about Doctor Who Season 12 on Rotten Tomatoes, namely the audience score was gone! A quick look at an archived page, here, verifies this is 100% true. For comparison, here is what the Doctor Who Season 12 Rotten Tomatoes score looked like on December 30, 2019 and here it is as it is now. The 32% Audience score in the screenshot is from January 9, 2020. This looks like a clear cut case of RT dumping all the audience reviews in order to try to manipulate the perception of Doctor Who Season 12. Those who believe the SJW menace is hiding under every rock are already pushing this theory as fact. However, these people failed to do due dilligence and check more of the RT site. 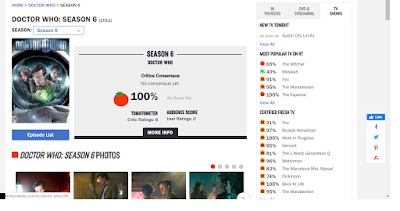 Looking more into the issue you can see that Doctor Who Season 6 also had it's audience score dropped from 85% to None. Sure, this could be hand waved away as nothing more than RT trying to hide the score on better seasons. So, we dig deeper in to the issue... 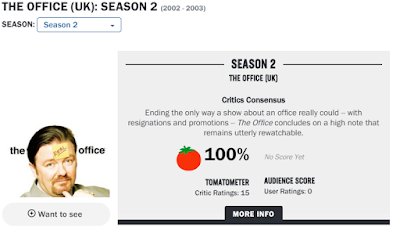 All 3 seasons of The Office (U.K.) have their audience scores missing. Here is Season 1 as it appeared on April 8, 2019 and here is how it appears on January, 12, 2020. Of course The Office (U.K.) has it's audience score missing, Ricky Gervais just pissed in the cereal of every one of Hollywood's elites. So, again we need to dig a bit further to see if this is a crazy SJW conspiracy of some actual RT glitch. 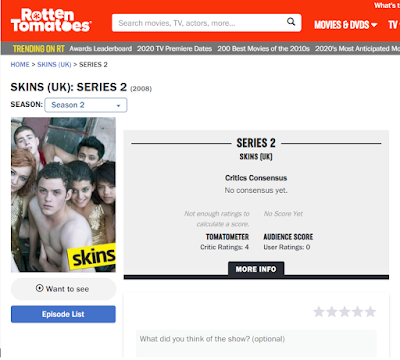 Just like The Office (U.K.), every season of Skins (U.K.) is missing audience scores. Season 1 does have a critic score, but the rest of the seasons lack that too. Here is Skins (U.K.) Series 6 as it appeared on December 8, 2017. Now here it what Skins (U.K.) Series 6 looks like on January 12, 2020. Now, unless some involved with the series Skins (U.K.) did or said something that offended an SJW, it seems clear RT is having issues. So, to wrap this article up, the Rotten Tomatoes core for Doctor Who Season 12 did indeed disappear. However, it was not the only show affected and we still have no idea why.