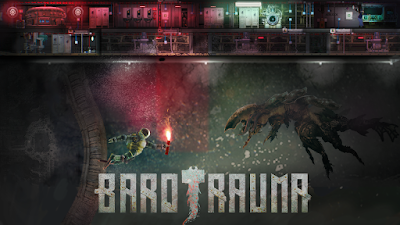 *Editor's note, The Geek Getaway recieved a review code for Barotrauma on Steam.

The Captain takes a break from sailing blind through vicious waters to learn why the hell the engine has stalled. Reaching the submarine's backend, she finds the Doctor, the Engineer, and the Security Officer screaming accusations. "He did it!" bounces back and forth between the Engineer and Doctor until the Captain asks his Officer to choose someone. The Officer lifts a harpoon gun and pins the Engineer to the floor. The Doctor sighs, his subterfuge a success.

None of it really matters, though, as five monsters burrow through the airlock, smelling blood.

This is a typical session in Undertow Games and FakeFish's co-op, sub-terranean horror game, Barotrauma. Published by Daedalic Entertainment, Barotrauma is available in early access on Steam for $29.99.

Barotrauma strands players immediately underwater on the frozen planet, Europa. In the single-player campaign, players take control of a small party of crewmen exploring the depths of the new world.

There's not too much to say about the campaign as of writing. Many features still remain in development. Players can adventure from outpost to alien hive to ruins, but there's not a great payoff for the struggle.

Players can pick up missions at most destinations. Missions reward credits that can be used to buy more crew, items, and repairs. With time, you can load out your submarine to launch nukes and tear through Endworms and other horrors. Most of the single-player fun comes from starting a new, randomly-generated map and building up a strong ship with a stronger crew.

The delightfully intense game mechanics make the experience somewhat addictive. Piloting the ship or fixing a reactor involves mastering many important mechanics; otherwise, you can expect to plummet far, far into the dark gaining a handful of hull breaches.

I also appreciate the mix of gritty art with goofy physics. The world appears as unpleasant and harsh as you'd expect an apocalyptic alien world to be; however, humans and aliens both have QWOP-like(ragdoll) body physics. Monsters can hectically toss themselves at crewmen, looking more like a funky, interspecies woohoo session than vicious mutilation.
The goofiness can interfere with single-player gameplay, as the AI often struggles to understand the loose body movement.

One engineer on my crew was ordered to fix the engine so our ship could dislodge itself from between some ice chunks. The engineer, instead, chose to get lost in a loop of walking to the engine, falling downstairs, and trying to walk back up again.

If I switched to the engineer and put the captain on autopilot, the captain would scream in the crew quarters about the lack of power. Once power was on, the captain forgot where the pilot station was and wandered aimlessly.

Piloting through alien nests and ruins can lead to a few hull leaks. AI crewmen normally fix these quickly, but they can freak out when water gets too high. Even with several diving suits and oxygen masks available, it's often up to the player to fix it.

Single-player isn't perfect. However, when everything works, it can lead to some incredible adventures.As great as those trips are, they are never as fantastic as the soap opera that is multiplayer.

Under pressure
Multiplayer feels more akin to a social experiment than a typical "let's beat the campaign" experience.

Sessions can range from serious, to roleplay, to rampage, and/or more. Tone and gameplay can often drastically differ between online matches.
Players choose their three top roles from six available choices (Captain, Engineer, Mechanic, Medic, Security Officer, and Assistant). Once appointed a role, they focus on their position on ship as opposed to switching between four or five other characters.

Barotrauma is a fantastic experience with friends. It is the perfect place for the usual multiplayer drama leading to you saying things like, "Daniel, did you seriously throw the cannon ammo out the airlock again."

It is also the best way to experience the limited campaign. There is no longer any worry about AI crew members leaving items across the ship in a confused hurry. The group of players can competently handle Europa and its numerous challenges.

If you're less invested in playing with friends or strangers, there is a spectate function. I find it surprisingly fun, as larger sessions often involve intrigue, betrayal, death, and general online hysteria.

Many times, I would join a lobby mid-interrogation. Some power-hungry security officer would be slapping insubordinates with a stun rod while the captain failed to pilot around a tight turn. Soon, the ship would be filling with water, drowning most (or all) of the crew.

The drama is fun to watch, but it can make completing the campaign with random people quite a task. Serious or campaign-focused sessions tend to devolve into absolute chaos.

I never found an online session that lasted more than two missions before falling into disarray. Chaos is to be expected with how open-ended and social Barotauma is, but it's something to consider when going into the game alone.

Barotrauma is still in early-access as of writing. The roadmap is available to view, showing all the upcoming additions and modifications. Undertow Games and FakeFish are actively working towards perfecting the title over time with players' help.

Even in its unfinished state, Barotrauma offers a lot to experience. More so if you have friends joining in on the journey.

If you're anything like me and prefer taking the game at your own pace, it may fall a little short. The issues with the AI can ruin a run. A lack of a complete campaign can mean there's not much to accomplish alone within Europa. More campaign functions lie down the road, but they aren't here yet.

Online play is popcorn-worthy. The anarchy in online sessions makes great entertainment. It's something I've missed since my big days of screeching in Gary's Mod Prop Hunt lobbies with a group of close friends.

I'm looking forward to seeing Barotrauma continue to develop. Additional factions, end-game content, and a true campaign conclusion hope to bring a full-fledged single-player experience I can enjoy while waiting on friends to join in the deep-sea mayhem.