One Punch Man: A Hero Nobody Knows releases February 28, 2020 + more details about the game 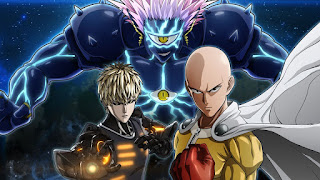 One Punch Man: A Hero Nobody Knows releases for PS4, Xbox One, and PC via Steam on February 28, 2020. The game is already open for pre-order at $59.95. As a pre-order bonus you will receive an early access code for Saitama's Dream version(a version of Saitama that takes damage and can be defeated), 2 additional outfits for Saitama(a black suit and a jersey), an a Saitama mask avatar part for your story mode avatar. One Punch Man: A Hero Nobody Knows features both a Story Mode and a 3 vs 3 Battle Mode.

For the story mode you will create an avatar to use as you climb the ranks of the Hero Association to become a S-Class Hero. The story mode will cover the first season of the One Punch Man anime. During story mode battles other heroes and villains can show up to interrupt the fight with scripted events. One notable person that can show up is King, whose mere presence causes everyone except Saitama to become frozen with fear. Each character will remain frozen for different lengths of time based on their individual personality. Their is no word if your avatar will grow to become less afraid of King or if it is a set time throughout the story mode.

The 3 Vs 3 Battle Mode, not the official name, is a 3 vs 3 tag battle fighter with a twist. Should you have Saitama on your team then he will not be playable straight away, rather he will show up after a set amount of time. This turns the game into a race against the clock because you will lose if your 2 other fighters are defeated before Saitama makes it to the battle. You can help Saitama show up faster by performing well against your opponents, so the game encourages you to do more than stall for time. When Saitama does arrive, well he is every bit as overpowered as you would expect. Saitam can defeat opponents with 1 punch and takes nearly no damage. I say nearly no damage because the developers programmed Saitama to have an absurdly large health pool and possibly extra high defense. This leads to the appearance of Saitama taking no damage, although behind the scenes he actually is and can be defeated by an opponent who also has control of Saitama.

There is plenty of time between now and release for more details to emerge, so we will keep you updated as we receive new details. For now, please enjoy the latest trailer of the game we embedded below.

Who doesn’t love something for free? Technically we pay for Game Pass, but it feels like we get free games, doesn’t it? This month's additions to game pass are hit or miss depending on your taste for games but there does seem to be something for everyone this month.  Added Already:   GRID Legends released on Feburary 5th this year sped it’s way onto the service on the 1st September. The fifth game in the series features a narrative driven story using the same live set technology that The Mandolarian used which sounds intriguing! The game supports up to 22 players and seems to have been reviewed fairly well.  Disney Dreamlight Valley released as early access on September 6th. Before you completely skip over this one I think it might be worth a look! It seems to be a blend of Animal Crossing and Starview Valley with a storyline to carry you through the game. Could this be a sleeper hit for the house of mouse?  Train Sim World 3 released on September 6th completely out of my wheelho