Posted by Freelance Writer on November 06, 2019 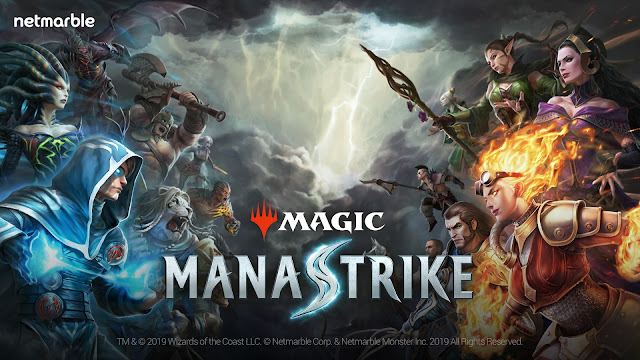 Mana Strike is an upcoming mobile game from Netmarble Monster studios and Wizards of the Coast. At the G-Star trade show, which will run from November 14 - 17 of this year, brand new details about the Mana Strike will be revealed.The game is already being tested in Netmarble's home of Korea as well as a few other regions around the world. Due to this and the nature of the internet, I am curious to see exactly what details will be released that are not already floating around the internet.
Mana Strike will have the same booster pack buying system familiar to MTG, and other TCG, veterans. It is unclear at this point whether you use Gold or Gems to buy new booster packs and cards. There is also no word if either is used to play matches or earned for winning battles. On top of these 2 in game currencies is some sort of Magic Pass. The details of what you get and how much the Magic Pass costs may be one of the things revealed at the G-Star trade show.
The gameplay of Mana Strike is nearly identical to Hands of the Gods: Smite Tactics,with a few changes to better fit on mobile devices. You arrange a deck built around your chosen Planeswalker and their mana color. Cards range from MTG monsters to various types of spells. You then summon monsters to your side of the 5 X 5 board and attempt to destroy your opponents Planeswalker. Monsters and spells all have a mana cost which means you can only use them if you have enough mana saved up. Mana is earned automatically and there may be cards to speed up or slow down how fast you or your opponent accumulates it. Matches typically lasting around 3 minutes.
Each monster card has several different stats in addition to the usual HP and Attack values. Monsters can have ground or air movement types. Their attacks can be limited to ground based enemies or able to reach both air and ground targets. Their is also special effects that can be activated upon summoning the monster. Cards, including spells cards, can be leveled up to improve their stats. All this means that rarer cards will be way more useful and drive the pay to win dynamic of the game.
Players will face off against live opponents but there is no word of a friend list feature being implemented.There is also no word if there will be any PVE features in the game or if it will be strictly PVP. Hopefully these will be the details revealed at G-Star. An English language trailer for the game was released and you can view it, as well as additional screenshots, below.