Luigi's Mansion 3 was released for Nintendo Switch on October 31, 2019. You can purchase the title for $59.99 new at most retailers. You can pick it up online straight from Nintendo. With a myriad of level designs and over 20 hours worth of gameplay, Luigi's Mansion 3 is the series' largest title yet. Additionally, it includes multiplayer features such as storyline co-op and two extra modes.

Without further ado...
Story
Welcome to the Hotel Last Resort! In Nintendo and Next Level Games' latest title, we find Luigi on a vacation trip to a mysterious hotel. Mario, Peach, and the Toads, whom tagged along, get kidnapped by the hotel manager, Hellen Gravely. Not only has she kidnapped Luigi's friends but she's also freed his nemesis King Boo! Luigi must travel through 17 floors of this hotel to defeat King Boo and rescue his friends. Luigi is accompanied by his pet, Polterpup, on this perilous journey. Along the way he will also enlist the aid of Professor E.Gadd and Luigi's own gooey clone, Gooigi. 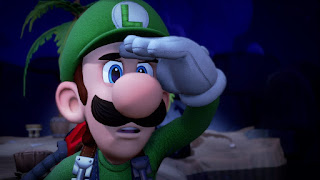 Gameplay
As Luigi, you'll use the Poltergust G-00 to suck up ghosts. You can also use your flashlight to blind ghost while sucking up their HP. Luigi's Mansion 3 also adds the ability to bash ghosts with a Slam attack to reduce their HP. If you've played Super Smash Bros. Ultimate you may recognize this as Luigi's Back Throw. This isn't the only new ability Luigi has learned between the last game in the series and this one. Luigi now has the ability to shoot plungers and perform a burst attack that damages those in the area surrounding him. You can use these abilities against normal ghosts and bosses. Additionally these abilities can be used to solve various puzzles found in the game. 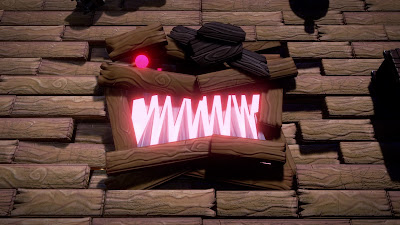 Visuals
Luigi's Mansion 3 features detailed animations. Luigi's expressions, the battling animations, and the lighting all liven up the haunted hotel. Plus, with each floor is a new theme. Themes vary from things like a pirate ship to a garden. The varied color schemes in each level really give them their own atmosphere and visual feel. 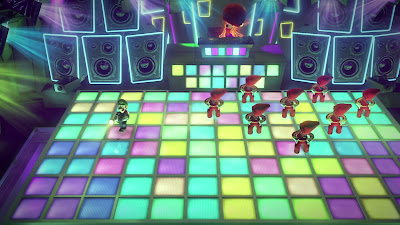 Music
The game's music creates atmosphere for each of the floors. You get medieval music playing in Castle MacFrights while groovy Disco music will play on the Dance Floor level. Additionally, the music changes to something faster paced and dramatic whenever you fight ghosts. You'll hear various genres and a number of epic boss themes during your time play Luigi's Mansion 3. 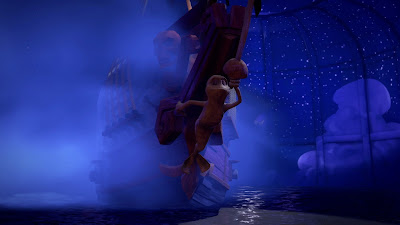 Features
Once you clear Luigi's Mansion 3 you are given a ranking based on how well you've played and what you've collected. You should know that some bonuses, such as Rare Ghosts, can only be found in ScareScraper mode. You can collect various jewels and Boos to boost your rating higher at the end of the game.

The game also features two multiplayer modes. The first mode, ScareScraper, is a 1-4-player game played either online or off. In ScareScraper you complete either 5, 10, or a random number of floors. You complete floors by catching ghosts, saving Toads, or completing other goals while working together. These dungeons may have the same background but they are constantly changing things up with randomly placed rooms, obstacles, and enemies.. You can have a friend join in during offline play and turn a solo outing into co-op. The end of each battle is against a boss: Boolossus from the original Luigi's Mansion.

The second mode, ScreamPark, is offline only. You'll compete in a 2 vs 2 mini-game featuring multiple maps. It is similar to Battle Mode from Mario Kart or just Mario Party in general. It should be noted that Nintendo has promised paid DLC to add more content to the multiplayer modes. 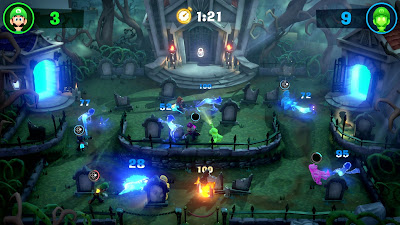 Likes
Luigi's Mansion 3 brings out the best in the series' formula. Unlike Dark Moon for 3DS, it drops the mission-based structure and instead returns to the exploration formula of the first game. If you're OCD like me, you will enjoy cleaning out rooms as much as I did. The boss battles are all epic. They function largely like puzzles instead of simple attack patterns. Each one offered a layer of depth and challenge as well as personality with each ghost. I had fun fighting all of them.

Multiplayer will leave you hooked for hours. ScareScraper always brings something new to the table. If you enjoyed The Legend of Zelda: Four Swords, you will love the cooperation in this mode as well. Gooigi also brings new layers of depth to the challenging puzzles. He helps you from near the start of the game all the way to the end. It's probably my favorite puzzle mechanic since The Legend of Zelda: A Link Between Worlds for 3DS where Link could become a drawing. 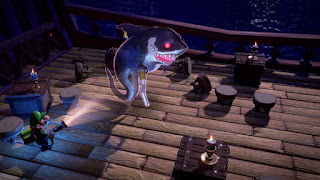 Dislikes
Unfortunately, some of the later game sequences are cut a bit short. The pirate ship and dance floor levels end after only a few rooms. In two sequences, you will chase Polterkitty around previously visited floors to retrieve an elevator button it steals. The fights with Polterkitty are fine, but chasing it down doesn't feel as fun as exploring new levels. I feel this is the only part of the game that stalled.

There's also little incentive to replay the game. There's no "second mansion" or New Game+. Collecting Jewels and Rare Ghosts don't offer their own incentive. However, you do get in-game achievements for completing tasks. In other words, you won't unlock more than cosmetics and the in-game version of a pat-on-the-back. 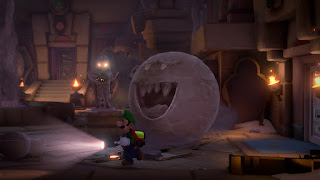 Final Verdict: Recommended
With that said, it's the longest and most impressive game in the series. It's fun all the way through, even on the slower parts. You're always fighting various ghosts and using different combat methods. Plus, the multiplayer is bound to keep you and your friends hooked for a while. If you enjoy catchy music, strong humor, and the charming adventure of an underdog in his biggest and best game yet, add Luigi's Mansion 3 to your Switch collection today!