Limited Run Games canceled a customer's orders, refunded his money, and banned him: Here's why

If you don't know who/what Limited Run Games is I will tell you about them in their own words. According to their about page, Limited Run Games is "...a publisher of limited run physical games for PlayStation Vita, PlayStation 4, and Nintendo Switch. We focus on bringing games that were previously only available in a digital format to a physical medium. We're game collectors and players who fear the prophesied all-digital future." In other words, they create physical version of previously released games and current digital only titles.

On November 20, 2019 it was brought to the attention of Jeremy Hambly AKA TheQuartering that Limited Run Games had canceled Bribot's orders, refunded his money, and banned said customer from ordering future games. Jeremy went ahead and put the information he was sent together and made a video blasting Limited Run Games for their behavior. After speaking with several people who are in the same Facebook groups as Bribot I can 100% say that he did in fact get banned, had his orders canceled, and was refunded. That is not being disputed by anyone. However, the why is not because of a meme like Jeremy Hambly states in his video but rather for spreading false information. Let's look at the facts.
Prior to Bribot being banned, Sarah(LRG customer service representative) sent out a message to the Limited Printed Games Facebook group. {Side note, the group is Limited Printed Games because it is not an official Limited Run Games Facebook group.} The message said to not spread false information and that is wasn't the best idea to use company assets. Sarah ended the message saying doing so might get you banned or worse. The, probable, reason Sarah sent this message out was because Bribot, and others, were posting doctored images of non existent Limited Run Games products. These images used an actual Limited Run Games ad and simply swapped Tetris Effect for other games like Skyrim and Return of the Bird King. Now, no one would be fooled by a Beerfest or Big Bang Theory fake ad but they might fall for the ones that were posted. 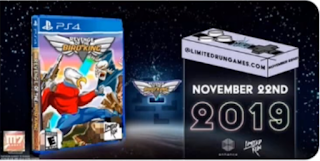 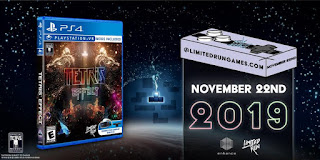 So, after being told very explicitly what not to do Bribot went and did exactly that. Repeatedly. Truly Bribot was the maddest of lads. Sarah put up with it for a while but eventually had enough and banned Bribot. Yes, just like Icarus, Bribot had flown too close to the sun. (Padding isn't just for YouTube videos okay?) She then sent Bribot a DM reply as to why he was banned.
The message Bribot received from Sarah after asking about his ban clearly indicates that Bribot was warned about his behavior in the past. Sarah goes on to explain that Bribot's orders did look like they were being refunded and that Bribot should recieve his money in 3-5 days. Sarah then advises Bribot to leave the situation alone and to stop pushing it or his behavior might light a fire under their lawyer's ass. Sarah ends the message by telling Bribot their is a difference between free speech and flagrant misinformation, linking the Cornell website's page on false information and hoaxes. That link can be accessed here.

Bribot showed off his refunded orders on Facebook After talking to several people it seems it isn't possible to cancel an order so Bribot did indeed have his orders canceled by the company. Looking into things a bit further I was told that Bribot had a bit of a grudge against LRG for the Return of the Bird King fiasco.


Well he was pretty much a very loyal LRG customer until the bird king situation arose.
Then he became super pissed thinking there was a bunch of shady back door stuff going on. he started aggressivly slandering LRG with facts, misinformation, and everything inbetween. Sarah lost her cool with him a few times on facebook  and so on, and he would then reply to her in a antagonistic manner.
Thats pretty much the happenings over the past few weeks that lead up to his ban.

Of course, I couldn't just take the word of a random person on Discord as the gospel soI asked for proof of these claims. I was sent several pictures showing Bribot upset with LRG over Return of the Bird King. 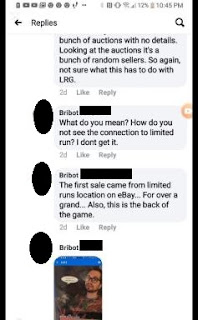 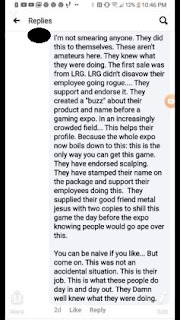 Well, it does appear Bribot felt betrayed by LRG. After looking into the Return of the Bird King fiasco myself I can understand why he felt as he did. Now you may agree with LRG and say this kid had it coming. You may agree with those saying Bribot was unjustly targeted. It is not my job to tell you how to feel or try to persuade you toward one side or the other. I am just here presenting the facts. One of these facts is that Bribot still plans on getting his games from LRG...