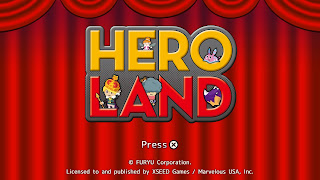 Heroland is an upcoming JRPG developed by FuRyu and published by XSEED/Marvelous that has been on many people's radars since it's E3 2019 debut. The main reason many have been anticipating this game is the all star team that was involved in its creation. Takahiro Yamane of Fantasy Life fame directed Heroland. Nobuyuki Inoue, know for MOTHER 3 and Legend of Mana, wrote the story of Heroland. Nobuhiro Imagawa, also know for MOTHER 3 and Legend of Mana, was the lead artist of Heroland. Finally, the music of Heroland were created by Tsukasa Masuko, the composer of Shin Megami Tensei. XSEED Games sent the Geek Getaway a review code for Heroland on PS4 and so far the game is living up to the reputation of it's famed developers.
Due to the embargo agreement given to me when I received the review copy I can't go into a full review for the game just yet but I can give you all a sneak preview. That said, I want to start with the story of Heroland. The focus of Heroland is on both your character, nicknamed Lucky, and a young prince, 18, of the Knowble Kingdom. Lucky and 18 both arrived at Heroland at about the same time but for vastly different reasons. Lucky is simply looking to make money to help his extremely poor and unlucky family. 18 comes to Heroland with his retainer Oak to find and defeat the Dark Lord in order to become 1st in line for the throne of Knowble. Now, you might think 18 is a weird name for a prince and I agree it is but I don't want to spoil the reason he is called 18 as it is a pretty funny exchange between the prince and another character.
That is the basic set up for Heroland but quickly things take a wacky turn as Lucky has to try to convince 18 that the amusement park Heroland is real and there actually is a Dark Lord on the island. Lucky is joined in his ruse by a man who looks like an Otter, a man who has a bear mascot head fused to his skull, and a magical fairy. If this all sounds silly, well it really is and the game lets you know that it knows it. From 4th wall breaking moments to pop culture references, Heroland never takes it self very serious. A lot of times when a game tries to do this it gets old really fast but so far Heroland has remained consistently funny and quirky.
The battles in Heroland are going to be the biggest point of contention for many fans of the JRPG genre. Unlike standard JRPGs, you do not directly control any members of your battle party. Instead, each one has an AI personality which decides which actions they take and what enemies they target when deciding to attack. While it makes sense from a story perspective, Lucky is simply a tour guide for Heroland, it really removes a lot of gameplay from the game.

Now, Lucky doesn't simply sit back and watch the action unfold the entire time. You can perform various actions such as directing the team to attack a particular enemy, direct a team member to perform a specific action, or use an item on one of the team members. However, Lucky can't perform actions willy nilly as he becomes exhausted for a few seconds after doing something. This limited involvement mechanic creates a unique strategic element as you have to decide when to act and when to sit back and hope your team doesn't screw up too badly.
The guest you can lead on tours all have the ability to level up, equip better weapons, and develop new skills as you become closer to them. You also have the ability to choose who to bring along, excluded storyline specific characters, which helps to make your party a flexible fighting force. So far in my playthrough of the game I haven't come across any situations where the AI decided to perform actions that would cause the party to be killed, but things may be different closer to the end of the game if you go into battle under leveled and unprepared.
The art in Heroland is very well done and it feels like both a 16 bit era game and something from the modern era. A lot of the visual gags start to feel a bit much after seeing them for the 50th time of so, but if you play the game in small doses you won't really notice that. That said, I look forward to diving back into the game and bringing a full in-depth review of Heroland on December 3, 2019 when the embargo lifts. If you want to learn more about Heroland then you should check ut the official Heroland website.