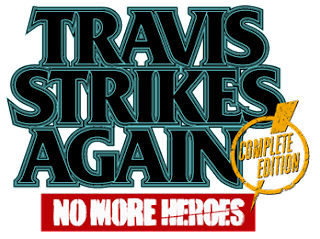 Let me be honest, I have never played a No More Heroes game before playing Travis Strikes Again: No More Heroes Complete Edition. I have heard about Travis Touchdown as he has popped up here and there in various conversations. I also have some knowledge of the series as a whole. Luckily for me, you really don't need to be a No More Heroes lore expert to get into this game.
Right off the bat I was sucked into the game as the comic book styled logo popped up and gave me nostalgia feels as it reminded me of the 90's Marvel comics I used to read as a teen. The motion comic style opening movie was also really good at not only setting the tone but giving you the basic plot of the game. I was ready to do some beam katana slicing and dicing as the game trust me into the Death Drive MKII.
I wasn't expecting to play a arcade style beat-em up but there I was, doing just that. The controls were tight and Travis moved around the screen faster than any beat-em up from my youth. The beam katana needing to be recharged, special skills on cool downs, and super attacks added a bit of variety that beat-em ups rarely have. I was so engrossed with the game that I didn't hear my family call me for dinner because I was too busy laying the hurt on Electro Triple Star! Having cleared the first stage I saved the game and finally went to eat. It was a homemade double cheeseburger with gyro meat, lettuce, onions, ketchup, and mustard in case you were curious.
I did play around with the game a bit after beating the first stage and I am really excited to see what the other Death Drive MKII games bring to the table. From my understanding each game is a different classic genre so I am curious to see how well the game pays homage to other styles of classic gameplay. The full review of Travis Strikes Again: No More Heroes Complete Edition should be up this weekend, so look for that if you enjoyed me talking a bit about the game. I will leave you with the same screen I saw when I last played the game.