Where the Bees Make Honey Review

*Editor's note: The Geek Getaway received a review copy of WTBMH on Steam

"Where the Bees Make Honey" is a Puzzle Game by Whitethorn Digital. It was released on Steam in March of this year, but is already available for the Playstation 4 and the Xbox One, and only just this month made it to the Nintendo Switch as well.

For the purposes of this review I'll be playing the Steam Version. 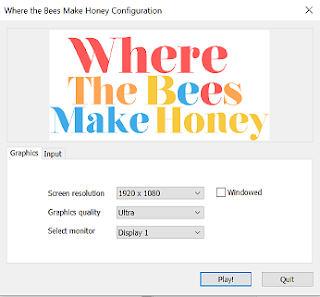 The first thing to note when you start up the game is that it offers a pre-launch configuration window;  In addition to selecting your resolution, graphics level, choice of monitor, and full screen or windowed mode, you can also customize your inputs; the game is compatible with the xbox controller by default.

There is also an options menu in the game with options for volume, sensitivity, inverted controls, and  subtitles.  Warning: the volume control doesn't seem to work in certain parts, so you may need to adjust it out of game to avoid an incident.

There are many ways to describe this game; trippy, whimsical, artsy?  The writing can be pretentious but the rest of the game definitely leans towards the more positive aspects I mentioned.  Near the beginning the audio was out of sync with the subtitles but that problem went away after the intro cutscene.

You play a telemarketer who hates their job and somehow is the only one to have got talked into working overtime one day.  The power going out is the beginning of a sort of trip into your own personal Wonderland, based on the telemarketer's memories of childhood.

In the beginning I was a little confused, since the game is advertised as a third-person puzzle game; I did not expect a reminder of The Stanley Parable.  The game goes wild with the variety of perspectives in the areas between puzzles.

The game's name, "Where the Bees Make Honey"  can be attributed to the Telemarketer always having been dressed in a bee costume when she was a kid; she compares her office job to being stuck in a hive, while her childhood is remembered as being always outside and free.  The title also connects to the puzzles, where collecting honeycombs is the objective.  You do this by rotating the stage to lower platforms or remove obstacles.

I mentioned the wraparound segments and their different perspectives; I wasn't kidding! The game has segments where you're platforming, car-jumping, and trying to dodge enemies.  There was never a moment where I thought "ugh, seen this already".


Sometimes the game can be a little confusing; there were areas where I spent quite a bit of time twiddling about before I found out I had already solved the puzzle and was supposed to have moved on.  There is also again the audio issue I mentioned; no matter how quiet you set the volume, the level completion audio is full-blast.

It's also possible to beat the game in just an hour and a half, but there are two endings.  Speaking of endings, after the credits roll the game immediately starts back at the beginning cutscene instead of going to the main menu, which is when I noticed you can neither skip cut-scenes, nor open the menu during cut-scenes.


I'm left with a question regarding a purple honeycomb I got in one of the levels after harassing a fox who kept trying to run away.  Not sure if it was necessary for the level or even what its purpose was; the achievements don't seem to indicate there's any secret I'm missing as all the achievements are accounted for.

It's definitely an experience I'll say that much.  There was a bit of eye rolling at certain parts of the character's narration, but it never lets you linger on that sort of thing, constantly changing up everything from stage to stage.

Did I enjoy it?  Yes I did.  Would I play it again?  No, other than to see the other ending it's pretty much a one and done type of game.  I kinda wish there were more puzzles, and the length of the game might be a concern at the price.

So, if you really like artsy games I'd definitely recommend buying this at full price, this is the game for you..

If you're only slightly curious after this review, maybe wait for a sale.