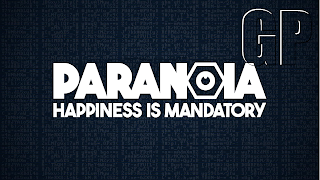 Red alert, Troubleshooters! Traitors have infiltrated Alpha Complex and stolen some of the game code for Paranoia: Happiness is Mandatory. Friend Computer is furious and is asking you to be extra vigilant. Because of this intrusion, Friend Computer has decreed that every citizen must remain confined to their quarters. The release of Paranoia: Happiness is Mandatory has been delayed until November the 14th, when the codes of the game are in a safe place!