We've already learned that Marvel's Avengers narrative will partly focus on Kamala Khan's journey to convince the retired Avengers to reform. This journey takes place years after the devastation caused during A Day and the disbanding of the Avengers. In the announcement trailer for Kamala Khan we also learned that Tony Stark believes the Avengers are responsible for the creation of people, like Kamala Khan, with superpowers. These super powered beings were referred to as "Inhumans" by the group AIM according to Khan in that trailer. If you missed that trailer or just want a refresher, I included it below this paragraph.


With the release of the newest Avengers trailer from Crystal Dynamics we learned why Tony said it was the fault of the Avengers for the creation of Inhumans. In that trailer we learn that the Avengers newest helicarrier, that explodes on A Day, used a Terrigen crystal generator. For those who are unaware, Terrigen crystals, and the mist they release, cause those with Inhuman DNA, DNA from ancient humans who were experimented on by the alien Kree, to develop super powers.

The new trailer also reveals that Advanced Ideas Mechanics, A.I.M., has been fighting crime and patrolling the world with advanced synthoid A.I. machines. Comic book fans will recognize the word synthoid as the description given to the type of robotic being the hero The Vision is. I suspect the game will introduce The Vision as a synthoid built from A.I.M. scraps by Bruce Banner and Tony Stark, rather than his traditional comic book origin. The new trailer can be seen below if you have yet to see it.
We have also received some gameplay insights into the game. Missions will be separated into 2 categories, Hero Missions and Warzone Missions. Hero Missions will focus on a particular hero in a single player experience. These hero missions will be designed to highlight the unique skills of the hero they feature as well as to move the campaign forward.

Warzone Missions can be played solo or with a group of up to four players. These missions will allow you to use any of the heroes you have already unlocked. Additionally, these missions will scale dynamically with the size and skill of the group attempting them. There is no word if rewards will also scale but I suspect they will as a way to encourage multiplayer. 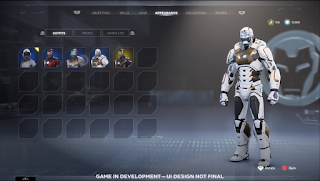 The game will feature a loot system reminiscent of MMOs like World of Warcraft or Looter Shooters like Destiny 2. Each hero will have several unique equipment slots. Each slot can be filled with various levels of equipment that offer unique stat and skill upgrades. Additionally each hero can equip a set of skills from a skill pool. This will allow you to have some degree of customization in gameplay style of each hero. Each hero will also have different costumes, from their comic book history, that offer a cosmetic change.

The developers of the game promise free updates for this game for years to come. They promised that ever hero and region will come at no cost to owners of the core game but I am rather weary of this statement. I can see the game release new content behind in game currency pay walls. The content will be "free" if you spend months to unlock it but for $XX.99 you can access it now. Hopefully I am wrong because this game looks like something I would love to sink a lot of hours into playing.