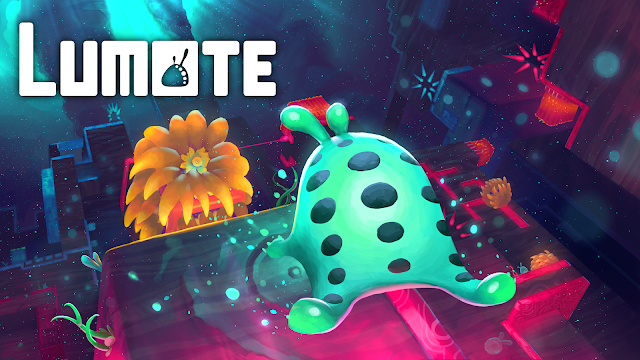 *Editor's Note: The Geek Getaway was provided a code for the Lumote PC Preview Build

Lumote is an upcoming 3D Platformer-Puzzler by new indie studio, Luminawesome Studios. The title aims to release on Steam in early 2020.

Most of the game involves hopping around as a small, bio-luminescent creature, Lumote. Lumote must save its world from a dangerous force known as Mastermote. Mastermote lies in secrecy, but its influence can be seen everywhere thanks to the aggressive, red neon drenching the landscape.

And that glowing landscape is gorgeous. Lumote mixes the mystery of a hidden, deep-ocean ruin with the loneliness of space. The chosen color scheme, mainly a mix of red and blue, works with this minimalist environment. Flora and fauna all sparkle and pop off the dark background. Everything echoes with life in a creatively simple way.

The majority of the game focuses on lite-platforming action and possession-based puzzle-solving. Lumote can latch onto other wildlife for a variety of results. Some creatures extend or recoil, building or breaking necessary bridges. Others, like the cute, cuboid monstrosities that beep-boop "Hello," help power-up the environment and open checkpoints.

Puzzles grow organically in difficulty, building seamlessly on previous challenges. While no level is distressingly difficult, Lumote never holds the player's hand. It is up to them to take what they learn and overcome each new hurdle.

While solving Lumote's array of brain-teasers, a soft, trance soundtrack hums away in the background. Droning bass and synth sounds serve as a reminder of how lost and distant this space-ocean world is. It's subtle, but it adds a lot to the atmosphere.

Lumote is to be a puzzle game worth keeping an eye on. Even in its preview state, Lumote's pieces all come together competently and confidently. I look forward to seeing how the luminescent title continues shining on next year.