Fission Superstar X is a rogue lite space shooter from developer/publisher TurboPelvis 3000. The game was released on May 21, 2019 for both PC via Steam and Xbox One. The game cost $14.99 on both platform with a $2.99 soundtrack available on Steam. On September 30, 2019 Steam trading cards were added to the game. 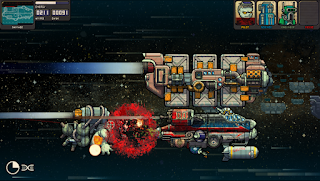 The story of Fission Superstar X is of a scientist, Dr. Leopold, from Planet X who decides his goal to destroy all the planets in the solar system was ridiculous. His new goal is to introduce his bomb, Celine, to the planets and put on the nuclear concert of the century. Yes, it is an insanely silly plot and the art and gameplay reflect this goofy mission.

The gameplay in Fission Superstar X is a combination of intense shoot-em up and rogue lite death and rebirth mechanics. After creating a pilot clone, putting points into 1 of 3 skills if you have the stored DNA, you choose from various options, dependent on how many runs you already made, and set off to deliver Celine to the planets of the solar system. In practice this means you pilot your ship around a "moving" space background as enemies appear to stop you from reaching your planetary destinations. Your ship is armed with up to four weapons, 1 for each crew member, that can rotate within a set zone to get a shot lined up. Weapons are varied and include everything from chainsaws to lasers. Enemies explode into scrap, collectible gold bars, and ammo pick ups. At the end of each section of space combat you choose a new destination, from 4, to continue your journey toward the planets. Choices include everything from weapon depots and shipyards to bars and fields of space cows. Upon death, you will die a lot, you are given a score and awarded DNA points based on how much "meat" you collected during your latest run. 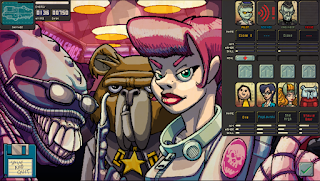 While the game has a goofy premise and features loads of off brand knock offs as possible crew members the gameplay is absolutely brutal. There are plenty of times you will find yourself  unable to line up a shot due to enemies refusing to get out of your blind spots. This is to say nothing of certain fast moving enemies with melee weapons that chew up your ship upon contact that can spawn in a blind spot of your guns before making a bee line toward your slow moving ship. The random nature of shops and recruitment bars can also leave you underprepared for your mission. The rogue lite elements are also a big miss in my opinion as the game never tells you how much "meat" equals a single point of DNA, money does not carry over, and ship and weapon upgrades are undone. Another issue is your newest pilot clone doesn't retain any skill points put into previous clones. This makes the early game either a series of  DNA "collection" runs or a complete ignoring of your clone pilot as you replace them as soon as possible.

As much as I love rogue likes and rogue lites, this game became very frustrating for me. I never felt like I was getting better at the game only luckier. The game opens up a bit if you manage to make it a few planets in but most players will quit playing long before that happens. If you are really patient and into rogue lite games then this one will be right up your alley, for everyone else this game is a hard pass.