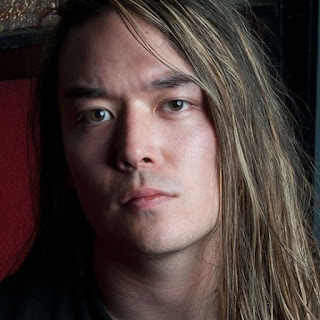 If you don't know who Justin Whang is, then allow me to give you a really short introduction to him. Justin Whang is a musician(currently the guitarist for Jynx), a YouTube personality(he made a blink and you miss it appearance in the YouTube Rewind video for 2018), an actor(check him out in the Netflix original show You), that kid from the Goonies all grown up, definitely not Steve Aoki, and a Twitch streamer. Seeing how I am a huge fan of his YouTube content and he does talk about video games from time to time, I reached out to him to see if he would answer a few questions. To my astonishment Justin actually agreed and I sent him 15 of the best questions anyone has ever been asked. Unfortunately for you the reader, those went to the wrong email address and I had to scramble and send the 15 garbage questions I had leftover. Before we get to those, why not have a more in depth look at Justin Whang by checking out the video made about him by Crimson Studios that is just under this sentence. Right down there, give it a watch it's only about 8 minutes.

Now that you are all caught up on your Justin Whang lore we should probably get to those questions the title of this piece was boasting about. Before we get to those, let's jump ahead and see what Justin had to say about the little interview we did.


The last question on the last interview I intend to do for a long time because I realized I hate interviews. pic.twitter.com/b8H7Az0cnB
— Justin Whang 🐙 (@JustinWhang) October 1, 2019

1) As a child entering and losing the Blockbuster World Championship did you ever imagine you would be playing games while thousands of people watch you?

2) Speaking of your childhood, what were your favorite games growing up?

3) Do you still play the same genre of games now that you played as a kid?

Sometimes, but there's not as many those types of games made these days.

I've been streaming a lot of Dead by Daylight

5) Is there any game coming out that you are looking forward to playing?

6) Why do you think there has yet to be a successful mainstream show or movie about gamers?

How could you make a show about people who spend most of their time quietly sitting in front of a screen that's both authentic and entertaining?

7) If you could stream a game with anyone living or dead, who would you choose and what game are you paying?


8) Which guitarist, living or dead, would you love to play Guitar Hero against?

I prefer to stream alone

10) On a more serious note, do you think the gaming industry is headed for another crash?

AAA gaming is unsustainable and indie games are making better stuff cheaper, so yes and no.

11) Seeing as you have Alex Chiu's immortality rings, what future gaming tech are looking to using the most?

What do immortality rings have to do with gaming tech? I'm not looking forward to any gaming tech. I'm more concerned with people making actual good games than seeing the character's skin pores and shit like that.

12) Since Kano Transformations were discovered to be another name for "Sec Chip Failures," do you think Shawn Attacks are just a rename of a different audit in MKII?

Not even, just a fake out or a lost feature

13) How do you feel about the current trend to censor adult content in M rated games?

15) What advice would you give to anyone trying to make a living making gaming content on YouTube, besides "don't do it"?

I took Justin's answer to the last question to heart and I want to remind everyone to go check out The Geek Getaway on YouTube. We have 1 short video up, linked below, and we are working on bringing you much more video content to compliment our excellent written coverage of video games.