You're only as good as the worst person in your field or Why video game journalism sucks![Update] 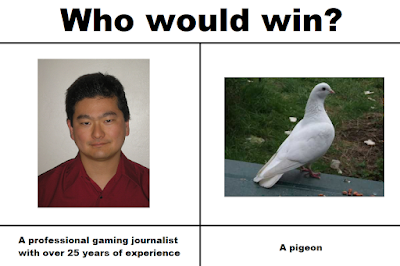 While it is true that no one person is truly an accurate representative of an entire field, industry, or group of people it can't be denied that those things are often judged by the worst example you can find. When a wrestler is caught doing drugs, suddenly the entire wrestling industry, from the carpetbaggers to the mega stars, are looked at as addicts. When a politician is caught with her hand in the cookie jar or his car parked in the wrong garage, everyone loses trust in politicians as a whole. So to does it go that when one video game journalist is shown to be so inept at a game that a 4 year old or a pigeon can outplay him then the entirety of video game journalism is viewed as a big joke.

This shouldn't be a huge deal, in fact video game journalist such as myself should rejoice when people in our field are exposed as frauds and fakes. I know that sounds odd but hear me out for a minute. When a baseball player isn't pulling his weight he is cut from the team. When a politician does a bad job she isn't voted in as president. When a video game journalist demonstrates a lack of basic gameplay comprehension then that person should be handed a pink slip and wished all the best in their future endeavors. Separating the wheat from the chaff is what makes other groups stronger. Doing so would surely make video game journalism a whole lot better but that's not what is done, is it?

No, video game journalism embraces the stupid. It holds those deficient in gaming skill close to its bosom. Video game journalism protects its own, even at the expense of its integrity and ethics. This is why video game journalism sucks and why no gamer with more than a year on the internet takes it serious. It is also the reason why so many "gaming" websites are failing. Their boards of directors watching untrained, inexperienced, "non-elites" put out better content and garner way more clicks and views. There are those who still cling to legacy gaming media. Fools that wish to work for IGN or Kotaku. Again, I am glad that such shills and unethical hacks willingly expose themselves on Twitter and through garbage content.

There is hope out there, so don't start digging the grave for the entirety of the industry. There are websites such as[Editor's note: After publishing this article it came to our attention that one of the sites we listed was not as gamer friendly as we thought. Apologies to anyone we may have accidentally sent there, I will try to do better in the future.] Gematsu and this very website you're on right now. For those of you looking for videos rather than written work then I suggest checking out Sid Alpha, Vara Dark, and SmashJT. All three channels strive to bring you accurate news with a dose of personal flair and style. While the field of gaming journalism can never completely remove the stink of those undeserving to be a part of it, we can all help it to get better by refusing to give those "journalist" and the websites they work for any more attention beyond pointing and laughing. Do you agree or disagree? Let me know in the comments below or shoots me a message on Twitter.