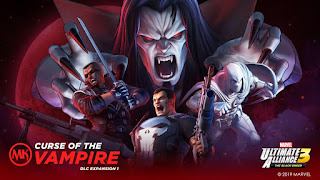 Marvel Ultimate Alliance 3: The Black Order is releasing its first of 3 DLC Packs, Maarvel Knights: Curse of the Vampire, late into the evening of September 30, 2019. This DLC, like the other 2 coming out later, is not available for individual purchase. All 3 DLC packs are part of the Marvel Ultimate Alliance 3: The Black Order Expansion Pass for $19.99.

The Marvel Knights: Curse of the Vampire DLC introduces Moon Knight, Morbius the living vampire, Blade, and the Punisher to the playable roster of the game. Along with these four playable characters the DLC introduces a new Gauntlet mode. Gauntlet mode introduces a series of co-op, up to 4 players, challenges in rapid succession for rewards. Should you finish the Gauntlet mode then you will unlock a survival style version of the mode which has continuous waves of challenges. This continuous wave mode has an online leader board to see how well you stack up to others.

There is also a free update dropping for anyone who already has the game that will add new costumes for Captain America, Thor, Iron Man, Black Panther, and several others. The free update also adds a new more difficult "Nightmare" story mode. This new difficulty will introduce new battle rules to shake the gameplay up a bit.