From Flash game to modern consoles: The long journey of A Knight's Quest 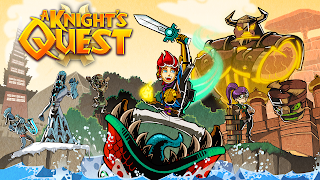 A Knight's Quest is being reported as a "new" Zelda inspired game coming to all major consoles as well as PC via Steam. However, the reality of things is far different. Now, before we get into the history of A Knight's Quest, let me give you the current details on the game. The game is being published by Curve Digital and was developed by Sky9 Games, with help from d3t. (I warn you to not try searching Sky9 Games without caution as some of the links in their website lead to virus filled pages.) The game has a release date of Fall 2019 with an expected $24.99 price tag. 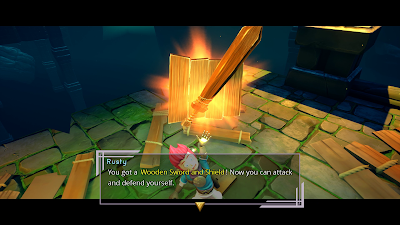 In A Knight's Quest you play as Rusty, a clumsy yet kind knight who accidentally set off a chain reaction that will result in the destruction of the world. On his adventure Rusty will gain magical abilities, new weapons, solve puzzles, and hopefully save the world. The game certainly looks fun and I expect many reviews will give it above average scores. What I doubt you will see, is many reviews talking about the history of the game and the fact it is a sequel to an old 2011 Flash game. 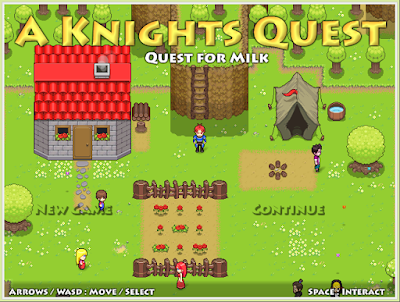 In 2011 Juice-Tin, the founder of Sky9 Games, released a free Flash game called A Knight's Quest: Quest For Milk. According to Juice-Tin the game can be summed up as follows. "Go on a wild journey to find milk in this humorous old school RPG! If you've ever played a Monkey Island game, you'll feel right at home." Quest for Milk is a rather fun, cute, little free Flash game that gathered a small fan following. On NewGrounds alone it has over 168K views, 485 favorites, and a 4.61 out of 5 rating. Quest for Milk would be plastered at every game site offering free Flash games. I'm sure some of the older gamers saw A Knight's Quest and had a strange nostalgic tingle, I know I did, and now you know why.
After many years of making free Flash games and gaining more followers, Sky9 Games announced the sequel to Quest for Milk, A Knight's Quest: Spirit Shield. In a blog post from September 1, 2015, Juice-Tin described the game a bit.

An ancient evil, a bold yet clumsy hero, a grand adventure, and a quest… with knights.

A Knight’s Quest is an action-adventure-RPG inspired by The Legend of Zelda and Metroid with an emphasis on humor, exploration, and combat. Over the course of the adventure you will discover new items and abilities that change the way you interact with the world, upgrade skills and weapons to suit your play-style. A Knight’s Quest is all about having a fun, light-hearted adventure and a worthy challenge.

It’s currently in Alpha development and will be on Kickstarter in October.
Platforms: Steam, with possible console releases shortly after.

Juice-Tin would even announce a website, now defunct and virus riddled, dedicated solely to the game. Fans of Sky9 Games were a bit leery of this game as they were used to getting free Flash games, but Juice-Tin did his best to assure them it wouldn't be too expensive at $10 - $15. 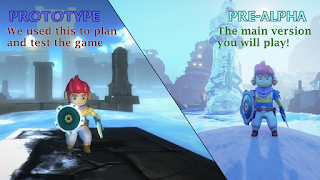 October 2015 came and passed with no Kickstarter being announced. It wouldn't be until February 3rd of 2016 that fans would get an update about the game.

"It’s been quite some time since we announced A Knight’s Quest: Spirit Shield, and that’s because we’ve been hard at work on a huge update! Since then, we’ve made the move from the Unity engine, to Unreal 4. This meant recreating everything from scratch, but also came with immense graphical and performance improvements."

Additionally Juice-Tin, at some point deciding to go by Justin, ;et the fans know that the Kickstarter would be just a few weeks away. The Kickstarter, as far as I can find, did indeed launch but it wouldn't be up for very long.

In October of 2017 Justin would make a forum post letting fans know the current state of the game.

"After a long time of hard work, we’ve officially gotten a publisher to help fund the game. This means Kickstarter is no longer needed and we can focus 100% of our time on developing the game!
Of course, no Kickstarter means no need for forums, as those were created just to communicate with backers.
While the website still primarily shows the old Unity content and has some oddities (forums used for update posts), we’re hoping to update it as we progress with new screens and such.
There’s a long way to go, but things are looking great so far!"

This would be the last word from Justin and Sky9 Games. The forums, YouTube channel, Twitter account, and Facebook pages all going silent shortly after that announcement. As we now know, it was Curve Digital that funded A Knight's Quest: Spirit Shield. Shortly after Curve Digital got involved the Spirit Shield subtitle would be dropped. The game would also get a 2018 Switch release date. Nintendo Insider ran an article on August 12, 2017 talking about the game.
Judging by the current trailer for the game it appears that the game has gotten another graphical overhaul. If you compare the earlier footage to the current one, you can see that the gameplay mechanics appear to remain more or less the same. The story also sounds the same as the one pitched in 2015. One does have to wonder if the jokes from 2015 have been left in or if they have been updated for "current year" sensibilities. There is also a question as to whether or not Sky9 Games is still involved in the development of this game or if Curve Digital bought the IP wholesale. Press releases for the game say Curve Digital developed the game in-house, but it could simply mean they bought Sky9 Games and kept the original team working on it. 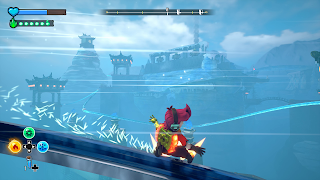 Whatever the case is behind the game's development, I do look forward to taking Rusty for a spin. The original Flash game was a funny, wacky, enjoyable adventure and I only hope this new game can capture that same spirit. Fall is right around the corner so I expect to get a set release date very soon. I will of course do my best to keep you all updated on tis game as more news becomes available.