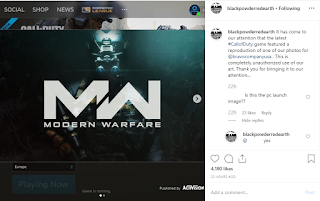 On August 22, 2019 the BlackPowderRedEarth Instagram account made a post accusing Call of Duty Modern Warfare of using a reproduction of a photo they took for BravoCompanyUSA. While many were quick to take BlackPowderRedEarth(BPRE) at their word, I wasn't satisfied with taking an accusation as truth. I reached out to BPRE and asked if they would answer a few questions about the post they made.

I was told the photo was taken in October 2015 and that they were never contacted by anyone representing the game. In my research of the photo the earliest version of it I could find online was from November 2015 on the BravoCompanyUSA(BCUSA) website.[Update: In the original version of the article I neglected to link the reverse image search from TinEye that gave the results.] BPRE went on to say they provide media and films for BCUSA. Due to this relationship between BPRE and BCUSA the copyright is actually held by BCUSA and not BPRE. Obviously this lead me to ask if it was possible that BCUSA allowed the use of the picture. I was told there was no chance BCUSA would sign off on the use of the photo. 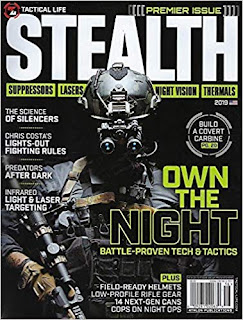 So, there you have it. Infinity Ward, Activision, or someone working on their behalf saw the photo and lifted it off the web to use for Call of Duty Modern Warfare. However, we still have no idea who was responsible for the theft nor do we know where they got the photo from. You see, in the 4 years since that photo hit the internet it has popped up on various websites not related to BPRE. It is possible that whoever lifted the picture off the web did so thinking it was copyright free. Conversely, they may have simply reached out to someone they thought owned the photo and were given permission by that person. So far no one involved in the making of Modern Warfare have given any response to the Instagram post and they have yet to answer my request for a statement. If anything changes I will update you.