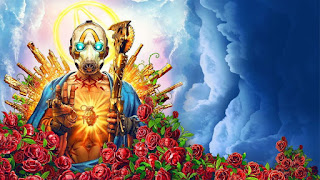 It’s been a long, weird road to Borderlands 3.

The series has suffered from a lot of negativity this year. Many headlines concerning the less-than-professional behaviors of those involved with Borderlands have overshadowed trailers and promotional materials. It has created a noticeable sense of excitement and dread. Last Friday, Sept. 13, Borderlands 3 hit the shelves for everyone to find out exactly what kind of experience it offers.

Thankfully, I happily found myself back at home in the new entry.

Slight spoilers for the first few hours of Borderlands 3 below

The game starts in true Borderlands fashion. Vault Hunters hears the call of a Siren, asking for help. The party, unwilling to say no, meet “CL4P-TP,” get a new Echo device and start on their bloody quest for fame and fortune.

Borderlands 3's intro sets the tone for the rest of the game. It is not trying to be "just a sequel": it's an homage to the things that made the series great. The new title marks the most Borderlands experience I've had with the franchise. I find myself constantly impressed with how the entry stands against its predecessors while not forgetting their legacy. Borderlands 3 is not all skags and sunflowers, but, in my 10 hours of playtime, I'm having a blast.

The new crew of Vault Hunters, FL4K, Zane, Moze and Amara, each play in unique, specialized ways. Characters' skill trees offer a wild amount of flexibility, such as Zane allowing the use of two active abilities at once.

I mainly play Moze, the Gunner. Normally, soldier classes bore me, but summoning her Iron Bear and detonating mobs of enemies into gore-splosions fills my heart with Pandoran joy. Thanks to her neat skills and the changes made to Torgue weapons, it's a lot easier for me to get into the demolitions playstyle.

Borderland 3's gunplay is already my favorite in the series. The addition of secondary gun modes makes almost every weapon more flexible and unique. Major arms dealers, such as Maliwan, Torgue, Jakobs and Atlas, all return with their guns shaken up in some, large or small, ways. Torgue rocket bullets can now stick to targets, turning foes into firecrackers as you reload. Atlas adds smart-tech to its guns, letting you highlight enemies with secondary trackers and fire homing projectiles at them.

Some gun changes aren't major. Most Jakobs weapons I have found only add ricochet on critical hits. It's not as crazy as other weapons, but sometimes I just want to apply 2000% weapon damage to the nearest bandit's brain cage.

Enemies benefit from diverse loadouts, as well. There are still the classics psychos eager to hacksaw your face off, but I have also fought off psychic "Tinks" and sci-fi police. All enemies, new and old, are incredibly aggressive. Even playing on Normal, the new game feels like less of a breeze than previous games. I'm interested to see how the Diablo-esque Mayhem difficulties and New Game Plus mode increase the challenge.

The story has been interesting, though faltering in some places. Getting off Pandora feels a lot less jarring than I expected, thanks to every other planet being equally as savage. Even the cyberpunk world, Promethea, has psychos crawling out the vents. Location designs help freshen up the Borderlands formula, and returning characters seem to reprise their roles quite well.

On the other hand, the new villain twins, Troy and Tyreen, struggle to fill Handsome Jack's trillion-dollar boots. I am not a fan yet of the "stream culture" caricatures. Something about their brand of evil doesn't seem as menacing as Jack's, even though they are terrorizing the entire universe. I'm hoping that, like Jack, their character arc helps make them more intriguing.

Some jokes are hit-and-miss, which is par for the course with Borderlands. The series always has plenty of pop culture references, outdated memes, poop jokes and quick one-liners scattered about. This entry is no different. Most of the humor has hit the mark, with only some jokes overstaying their welcome.

There are some issues I've experienced that sour the rather fantastic experience I've had so far.

One of the major selling points of Borderlands, for me at least, has been its couch co-op potential. Every entry thus far (excluding Tales) has integrated split-screen play seamlessly. Want to introduce a loved one to the series? Sit them down, help them build a character and enjoy each other's company while exploring Pandora's wasteland. It's a whole heap of fun, but not in Borderlands 3.

The difference between single-player and split-screen is startling. Couch co-op chugs on my PS4 Pro, the framerate normally below 30 FPS. Opening the Echo menu often freezes the game for seconds at a time. There's almost never a moment where the framerate feels steady, even on performance mode.
Split-screen has also been incredibly buggy. Audio either stops playing or plays in loops. Dialogue skips, meaning important story info flies out the window. Textures can load at a slow rate, making the normally beautiful landscapes ugly. Weapon icons will fail to match up with their items. So much goes wrong the second split-screen starts. It's hard to believe anyone properly tested the couch co-op before release.

The UI, while sleek, is incredibly tiny on my TV. So tiny, I had to move up my couch just to play. On split-screen, the UI only gets tinier, making it nearly impossible to read any information on-screen. As of now, there is no way to resize the UI or HUD.

Single-player has its own issues. Moze can sometimes get ejected from her mech the second she summons it, restarting the long cooldown wait. Framerate falls in some areas, even when there is not much happening. I have not lost all audio entirely, but music and gunshots can suddenly stop playing until restarting.
Gearbox acknowledges the technical issues and UI problems, but a patch has yet to be announced.

I am rather excited to see the rest of what Borderlands 3 has to offer. While issues bog the title down, there is a chance for a future patch to handle the game's messy state. It doesn't excuse the sloppy technical issues, but I am grateful that the series' heart seems to beat within this sequel.