Streets of Rage 4: Everything we know so far... 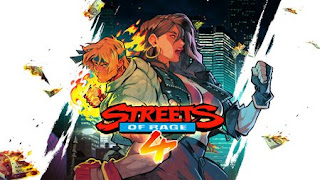 "A cult classic Streets of Rage, known as Bare Knuckle in Japan, is a trilogy of beat 'em up games developed and published by SEGA in the 1990's.
Famously known for its non stop action and electronic dance influenced music - scored by Yuzo Koshiro and Motohiro Kawashima - the series has gained the status of cult classic throughout the years. It is considered one of the best beat 'em up series of all time. After many years, Axel and Blaze are finally picking up the fight where they left.
Featuring hand-drawn visuals from the team behind 2017’s gorgeous Wonder Boy: The Dragon’s Trap remake, Streets of Rage 4 builds upon the classic trilogy’s gameplay with new mechanics, a fresh story and a gauntlet of dangerous stages with a serious crime problem. Streets of Rage 4 recalls classic gameplay but it stands as an entirely original arcade-style romp thanks to the expertise of Guard Crush Games and Dotemu.
Whether players gang up with a friend or clean up the city solo, Streets of Rage 4 is a skull-bashing, chicken-chomping delight all set to a thumping soundtrack sure to get your blood pumping."

The game is said to take place many years after Streets of Rage 3, but the exact number of years is unclear. Axel and Blaze look older but not too much older. As of writing this, on August 24th 2019, there are only three characters that have been revealed. Axel and Blaze return and are the only two characters to make an appearance as a playable character in all four games. Joining them is an unknown person with what appears to be a robotic arm and Cherry Hunter. Cherry is the daughter of Adam Hunter, the most requested Streets of Rage character to never be playable after his initial appearance, but her gameplay seems to be closer to her uncle Skate's style of combat than her father's. Additionally, Cherry has a guitar that she uses to pummel enemies with and play deadly rock chords on.

Side scrolling beat'em ups have always been one of my favorite genres of video games so I was excited when I heard the king had returned. I can't wait for the fourth character to be announced and I am praying this game does well so we might see more neo old school, I stole that term from Vara Dark, games coming out in the future. All we can do now is sit back and wait for more details about this game to be announced. Below is a small list of features the developers have revealed.