Need for Speed™ Heat trailer dropped, let's talk about that! 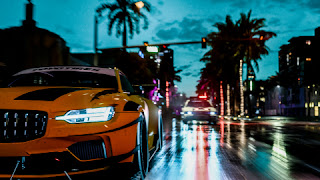 On August 14th 2019, Electronic Arts revealed the trailer for Need for Speed™ Heat. Now, I'm not the biggest fan of racing, the only things I know about racing comes from the Fast and Furious franchise, but this trailer blew me away! What could have been another game that I ignored has suddenly jumped up onto my radar. I have included the trailer in this article so you can take a look too. There is no gameplay in the reveal trailer but Electronic Arts has said it will show gameplay footage during the opening night, August 19th 2019, of Gamescon. I usually skip events as they're mostly hype with little substance, but I am curious to see what Need for Speed™ Heat looks like in action. I'd love to hear what opinions you readers have on the trailer. Are any of you excited for this game? Are you planning on skipping Need for Speed™ Heat due to the propensity of Electronic Ars to shove microtransactions into all of its games?
That said, not much is know about Need for Speed™ Heat at the moment, but there are a few interesting tidbits in the official press release by Electronic Arts and Ghost Games. First off, we know the game launches November 8th, 2019. That said, the game takes place in Palm City. It is a brand new city in the Need for Speed universe that I can only assume, going off of the name and the visuals in the reveal trailer, is based on Miami. That said, I wonder if the weather will be relegated to a mere visual change or if it will have an affect on gameplay.

The story will task the player with living a dual life of a racer in sanctioned Speedhunters Showdown races during the day and an underground racer at night. The daytime races are where you will make "Bank" to customize your cars and garage. The underground races at night will see you earning "Rep" as you compete against other Dominic Toretto wannabes. Additionally, at night you will have rogue police officers chasing you as they try to take you down and steal your cash.

Fans are always wanting more from a sequel than what was in a previous game and Riley Cooper, Creative Director at Ghost Games, had this to say on that subject. “We’re delivering more options than ever before for players to be unique and make themselves known. Our fans have been clear that they want more cars, more customization, and more challenges, and we’re tuning up on every aspect. From your character’s style to your car’s performance and your driving style, we’re fuelling everyone’s creativity with this new game.”

There are several bonuses for people who pre-order, so I will detail them here. First up, if you pre-order the standard edition you will receive a K.S Edition styled Mitsubishi Evolution X. If you opt for the Deluxe Edition then you also get three K.S Edition styled cars, a BMW i8 Coupe, a Mercedes C63 AMG Coupe, and a Chevrolet Corvette Grand Sport, access to exclusive deluxe edition character clothing, and increased earnings of Bank and Rep, the in game currencies, in addition to the standard edition pre-order reward. If you choose to pre-order Need for Speed Heat using the in-game shop from Need for Speed Payback, on any format, you will also get a 10% discount as a Loyalty Reward.

If you want to stay up to date on Need for Speed™ Heat you can check out their Facebook page, follow the Need for Speed channels on Twitter®, Instagram and YouTube. Or, you can always check in here and get all the facts and none of the superfluous information.