Fortnite's B.R.U.T.E.: Is it a minor shake up or a game changer? 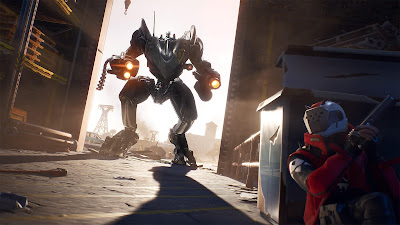 On August 1st, 2019 the Fortnite V10.00 patch notes were released. Among the bug fixes and updates was the announcement of the new B.R.U.T.E. mech suit. The B.R.U.T.E. is a powerful new "two person" vehicle that can be used to rain death and destruction down upon your enemies. Now, I used quotes around to person because the B.R.U.T.E. can be piloted by a single player quickly switching from the pilot and gunner positions.

While the Fortnite community initially embraced this new vehicle, it quickly soured on it as it added too much randomness to an otherwise skill based game. High skill players were finding themselves eliminated by lower skilled players in the new B.R.U.T.E. and this did not sit well with them. This lead to #RemoveTheMech appearing on Twitter the first day of the new update. As the days progressed new quirks of the B.R.U.T.E. became apparent to the community. The B.R.U.T.E. had the ability to stomp builds and players were finding themselves killed by fall damage as their high level builds were suddenly destroyed by a B.R.U.T.E. player. The entire flow of the game changed now that high builds were seen as a liability and not a benefit.

On August 14th, 2019 Epic Games released the V10.10 patch notes. Mixed in  with the standard fixes and updates was a small tweak to the now infamous B.R.U.T.E. mech. They added a visible laser to alert players were the B.R.U.T.E. missiles were aiming. Added the ability to directly enter a B.R.U.T.E. from glider mode. The biggest and most important change however was the spawn rates for the B.R.U.T.E. were lowered. This now meant less B.R.U.T.E. mechs would show up but the community was still not happy as they wanted the B.R.U.T.E. gone from the game completely.

One day after the V10.10 patch notes were released Epic Games would address the B.R.U.T.E. controversy directly. In a news item on the Fortnite website titled 'Fortnite and the B.R.U.T.E.' the fans would be told in no uncertain terms that the B.R.U.T.E. was here to stay. In fact, Epic Games seems to think the B.R.U.T.E. is having the desired affect on Fortnite that they intended it to have, allowing everyone, no matter their skill level, a shot at a Victory Royale. This response from Epic Games only added gas to an already raging fire and several pro Fortnite players are already eyeing other games to play.

The second issue that the graphs do not even mention is how the gameplay has radically changed due to the B.R.U.T.E. being included. As I previously mentioned, the entire meta of Fortnite has been altered as building high is no longer seen as a viable option. Additionally, the random nature of the B.R.U.T.E. spawn has lead to some matches being far more lopsided as a B.R.U.T.E. can even the odds for a bad player but it can almost guarantee a win when controlled by a pair of good players.Especially if those good players happen to be in a match with players at or below their skill.