My Thoughts So Far - Ni No Kuni 2: Revenant Kingdom 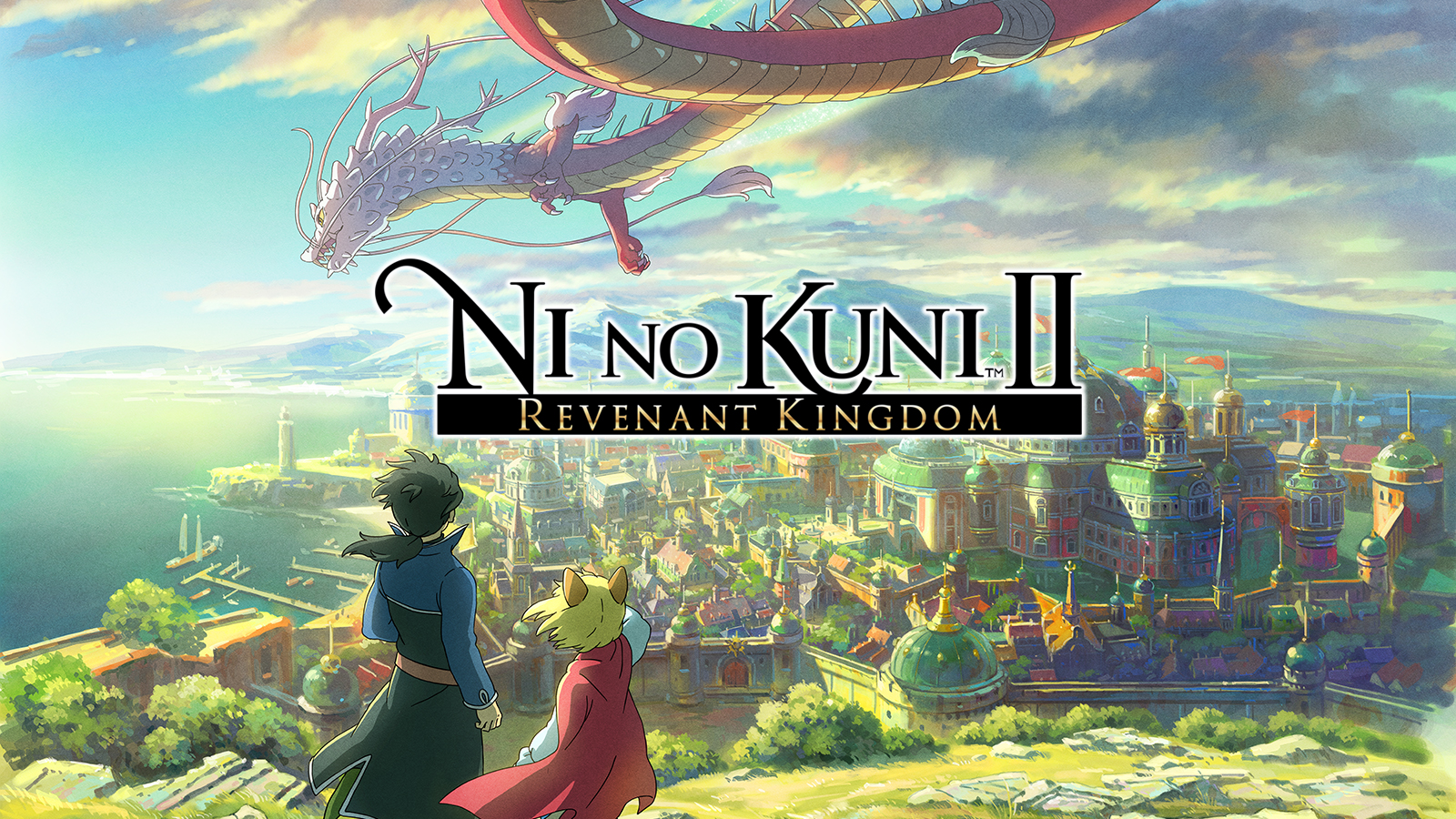 Welcome to the first edition of My Thoughts So Far, an ongoing series I will be doing here that will take an in depth look at a game that I haven't quite finished just yet. In a way, it will be a full blown review, but of only a small portion of the game I am talking about. Today's subject is Ni No Kuni 2 : Revenant Kingdom and as of the time of writing this article I am 8 hours into the game. We will only be covering the opening of the game in this article because their is a lot to say about the first ten minutes of this game. Be warned, there will be spoilers and no real logical flow to what I'm about to type. It's just going to be a stream of consciousness of my thoughts on Ni No Kuni 2 so far. Buckled up and ready to go?

Okay, so Ni No Kuni 2 kicks off with the President, of what I can only presume is the US, riding in a limo, that is part of a protective detail convoy, heading toward a big city. Seconds later, as the limo nears the city but is still on the bridge to get in, a missile comes flying overhead and explodes in the heart of said city, causing such a huge blast that the limo is flipped over several times. Ok, so this is a bad ass opening and I'm stoked at this point. My mind is racing as to how this is going to impact the fantasy world I know Ni No Kuni 2 features. I mean, maybe we have to rescue the president and bring him over to the fantasy world or possibly we have to play as the president and crawl our way out of the rubble to only fall into the fantasy world. The game, in the first bit of hack writing, chooses the cliche eyes shut, pass out, eyes open and we are in another place trope. That initial let down continues throughout my 8hrs of playtime with Ni No Kuni 2. 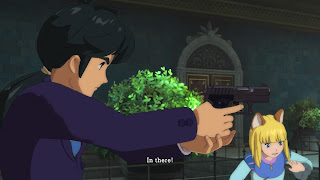 The president, now a younger man, meets Evan the King of Ding Dong Dell and immediately runs off. Sure he asked where he was, but he didn't bother waiting for a damn answer. Roland, as we find out a few seconds later is his name, doesn't even seem the least bit worried about a city that blew up in front of his eyes. Not even mentioned. The player is given a brief explanation of the controls and away we go down the castle stairs fighting the wonky camera. You see, while the camera is 100% controllable by the right stick every once in a while it decides to readjust itself because the stairs are a spiral and the developers must have thought the players would be too stupid to center the camera on their own. The player bumps into a group of mouse guards that Evan tries to order around but it is clear they are not looking to Evan for leadership. After Roland realizes the guards are staging a coup Roland pulls out a gun and shoots one. Yes, the presumably American President walks around with a pistol in his jacket like some kind of gangsta. I know America is often seen as the land of guns and stupid decisions but give me a break. How hard would it to show Roland checking on his bodyguards, grabbing one of their guns, then pass out and get magically transported to Ding Dong Dell? It's lazy writing This leads to Roland grabbing the dead guards sword and the player getting a brief tutorial on combat. 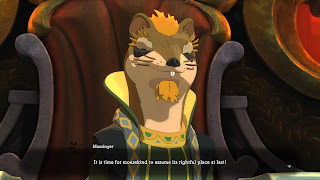 The player is privy to the fact that Mausinger, the adviser to the previous King(Evan's recently murdered father), is the one behind the coup attempt. Apparently Mausinger and the mouse people are still holding on to an ancient grudge against the Grimalkin, Cat People, and Evan's father was slowly poisoned in order to mask his murder as a natural death. Well, if I had any idea who the former king was as a person or why he would trust Mausinger, and by proxy why this betrayal is shocking, I might be intrigued by this revelation. Instead, I am just bored by yet another tired trope being trotted out as if it is something new. 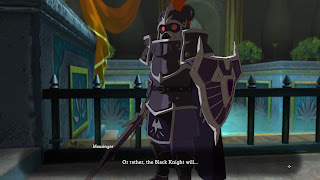 Mausinger is informed that Evan has escaped but he doesn't seemed worried because The Black Knight will find Evan. Honestly, I was pumped for this because The Black Knight looked pretty cool. I was already guessing he would be our first boss, but I had strong feelings that we wouldn't defeat him in our first encounter as he looked too cool to be a one off villain. That said, we now go to a moment between Roland and Evan chatting when suddenly the voice work just stops. Well, stops isn't exactly accurate as Roland and Evan make grunts and partial word noises as text is displayed onscreen. Now, I realize JRPGs are text heavy and story driven but whoever thought it was a good idea to have these characters make noises instead of speak the lines should be fired. Okay, not fired, but given a stern talking to. I mean, either have the characters speak or don't, this noise ridden text reading is very, very stupid. It add nothing to the text and in some cases distracts the reader. 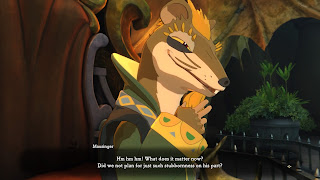 So, to summarize what has happened so far, after ten minutes of gameplay we fought 1 battle, learned the name of the guy overthrowing Evan's kingdom, learned a tiny bit about our main characters Evan and Roland, and suffered through lazy writing. That is to say nothing of the art, which is good, that somehow manages to come off as a Studio Ghibli knockoff. This is going to be a long game folks and we have just scratched the surface of the problems.