Welcome to the third, and hopefully, final installment of 3 Characters I Want To See In The MCU During Phase 4. In the first part I talked about three characters that fans have been demanding to see for quite a while. In part two I discussed three lesser known classic characters. Well, in this part I am going to discuss three characters who debuted in the 90's and yet many MCU fans probably never heard of them. With that said, let's get to the list. 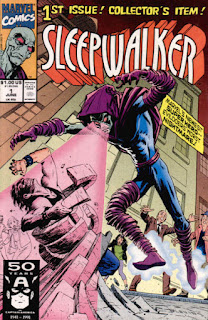 Sleepwalker
Debuting in 1991, Sleepwalker is a being from the "Dream dimension" that borders the unconscious minds of sentient beings. In this dimension are many creatures that wish to harm the living beings bordering the dimension. Sleepwalker, and others of his race, act as "policemen" of the dimension, stopping and imprisoning these evils. Sleepwalker, tricked by his nemesis Cobweb, becomes trapped in the mind of human college student Rick Sheridan. After some misunderstandings between the two they come to a compromise that allows Sleepwalker to emerge from Rick's mind and fight crime as Rick sleeps.

With rumors circulating that Dr. Strange 2 will feature Nightmare as the primary antagonist, it would be an easy feat to have a cameo of Sleepwalker in the dream dimension and perhaps even assist Dr. Strange. If not a cameo, perhaps Dr. Strange could meet others of the Sleepwalker race and hear about one of their numbers who was lost in the human world, prompting a quick tease of Sleepwalker making a MCU debut soon. With very little history in the comics, Sleepwalker would be the perfect character to debut in the MCU as he would come with no baggage and tons of potential. 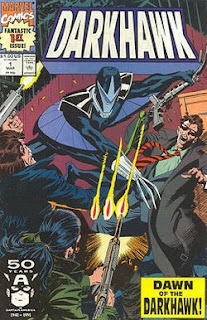 Darkhawk
Also debuting in 1991, Chris Powell is the son of a corrupt police officer that finds a magical amulet that allows him to transform into the android Darkhawk that Chris controls with his mind. With his new android form Chris fights crime in New York City. Over the years the origin of the Darkhawk amulet has been retconned and altered, but as it stands currently Darkhawk is a member of the evil Fraternity of Raptors that is trying to conquer the universe. It is only due to the biology of humanity that allows Chris to override the amulet's control and assert dominance upon the android body.

Much like Quasar, Darkhawk is a character that could add a lot of depth to the space side of the MCU. Additionally, Darkhawk has recently met Sleepwalker and as told he needs to become one to help save the Dream Dimiension which makes for a nice way that Darkhawk and Sleepwalker are connected outside the MCU and maybe even inside. Like Sleepwalker, the lack of knowledge by the general movie going audiences would allow Darkhawk to be altered to fit the MCU with little to know complaints from fans. Nightwatch
Debuting in 1993, Nightwatch has a rather complicated comic book history. Dr. Kevin Trench witnessed the murder of a masked superhero only to discover upon removing the dying hero's mask that it was an older version of him. Fearing that he was fated to die, Trench stole the costume from the dying future version of himself and fled to a remote island. Believing if he refused to wear the costume or go back home he would not die he planned to live out his life on the island all alone. However, that would be a boring comic so he was eventually coerced from the island after a criminal stole one of the suit's gauntlets. After deciding to discover the origins of his suit he ultimately defeats the inventor, travels back in time to complete the loop, and is never heard from again. However, he is brought back years later with a completely reworked history. It turns out Nightwatch never existed, instead Nighteater was a super villain who wished to become a hero before he retired in fame and glory so he hired several villains to alter reality and create the Nightwatch lie. She-Hulk eventually was able to reverse the spell and bring Nighteater to justice and that's where his story ends.

With the Avengers going through time in Endgame, it would be cool to see Nightwatch appear as a "hero" who helped the citizens of New York after the first snap only to have him be revealed as a villain prior to the snap. His story could be altered to say that all the people who knew he was a villain were snapped away by pure luck and Nighteater used that opportunity to transition into Nightwatch. Having Nightwatch join another MCU hero, Moon Knight maybe, to investigate the mysterious murders of several people connected to Nightwatch's civilian identity only to reveal that Nightwatch was a villain would make an interesting story that keeps most of his comic book history intact while also fitting him into the MCU quite nicely. As always. feel free to comment, like, share, tweet, or whatever other thing you kids do on your social media these days.