Last time I discussed Moon Knight, She Hulk, and Quasar but I don't feel I was thorough in my explanations of who they are and my reasons for wanting them in the MCU. I will be providing links to the Wikipedia pages of everyone this time around in addition to giving a brief description of who they are. Hopefully I will do a much better job describing everyone and get some of you talking about these characters potentially coming to the MCU. Without further padding, let's get to the list... 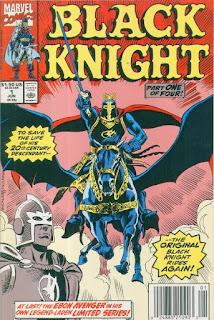 Black Knight
The Black Knight is the name of several characters in Marvel comics, the most famous being Dane Whitman the nephew of the villainous Black Knight Nathan Garrett. Whitman is also a descendant of the original black knight, Sir Percy of Scandia and it is the legacy of Sir Percy that Whitman attempts to emulate. Armed with the cursed Ebony Blade, the blade influences its wielder to kill, Dane Whitman has fought for justice as a member of several superhero teams, the most famous being The Avengers. Dane Whitman has had several costume and weapon changes over the years but his original look remains his the recognizable version of the character.

With his strict code of honor and morals, Dane Whitman needs to be in the MCU to replace Captain America as the "boy scout" of the Avenger team. In addition to being the new goody two shoes of the team, Whitman would add another character, in the vain of the MCU version of Ronin, with a inner struggle between bringing villains to justice and wanting to kill them. If that doesn't have you convinced, allow me to say one more word...Pegasus! How cool would it be to see a flying horse in the MCU that was not created by Odin but by a scientist in a lab. Bonus points if they go with the black version with bat wings. 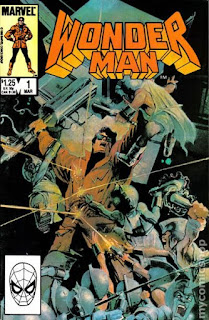 Wonder Man
Simon Williams AKA Wonder Man is a villain turned superhero who has been a part of the Avengers following his change of heart. Williams was given his powers by Baron Zemo in order to extract revenge on Tony Stark, whom he blamed for the loss of his family company. Wonder Man is nearly as strong as the Hulk, almost completely indestructible, and, in his later appearances, able to fire blasts of ionic energy. In addition to his super powers, Williams is a highly successful actor.

In the comics Wonder Man was in a coma following his defeat at the hands of The Avengers, with his brain patterns stored on a computer. It is Williams' brain patterns that created the personality of The Vision and it would be interesting to see The Vision of the MCU revived in a similar manner. This could lead to a love triangle between Williams, Vision, and Scarlet Witch just like we had in the comics which would add an interesting wrinkle on the Vision/Witch romance. There are rumors that actor Nathan Fillion shot several scenes as Simon Williams for Infinity War, but those scenes were cut for time. Perhaps they were really cut to introduce Wonder Man in a much grander fashion, which is something I could get behind 100%! 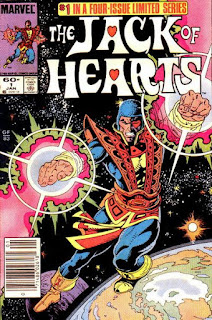 Jack of Hearts
Jack Hart AKA The Jack of Hearts is a superhero who has the ability to fire blasts of "zero energy" thanks to his exposure to Zero Fluid and alien DNA. His powers were unstable for a time, requiring Jack to wear a special suit to keep him from exploding. In addition to having adventures on Earth, Jack of Hearts also traveled the space ways having adventures with many space based heroes. Like the others on this part of the list, Jack of Hearts was a member of The Avengers.

Admittedly a lot of Jack's backstory would be retreading old ground with Peter Quill already in the MCU, but I think adding another human/alien hybrid could give Quill someone to relate to and allow him to act like a mentor to Jack. Additionally, the MCU could use more space based heroes and like Quasar, Jack of Hearts would make a fine addition to the space ways of the MCU. LAstly, a character who could literally explode and kill everyone around him should he lose control would add a nice bit of tension to fight scenes needing Jack's immense power. Well, there is my latest list of characters I want to see in the MCU. As always. feel free to comment, like, share, tweet, or whatever other thing you kids do on your social media these days. If you have an idea for a post, whether you want me to write it or want to write it yourself, please feel free to drop me a line in the comments. Also, if you feel like I should go more or less in depth on my choices by all means call me out on it.