The Most Toxic Element In The Gaming Community Is Non Gamers! 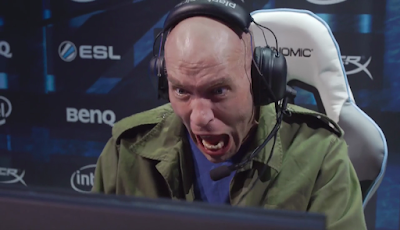 Gaming is no longer a niche hobby that nerds and geeks do as the rest of the world mocks and ridicules them. No, gaming is now a multi billion dollar industry that just about everyone participates in while mocking and ridiculing the geeks and nerds who were involved in the scene first. Look, if you want to play video games and participate in gamer culture then we gamers are more than happy to have you join us, but if you think for one second that jumping on the video game band wagon entitles you to decide what is or isn't acceptable in gaming you're God damn delusional. Gamer culture was forged in the fires of tea bagging and rage quitting. We were telling each other the vulgar things we did with our opponents mother's and pulling 360 no scope headshots while you were wasting your lives watching Jersey Shore and making Kim Kardashian the richest former porn star in the world. Yeah, I get it, not everything we do makes sense to non gamers and God damn we wouldn't have it any other way! You see, gamers are not some amorphous blob or a collection of losers trying to be cool. We are a band of brothers, a family, people bonded by a common love for playing games and racking up kills on noobs.

Alright, now that I'm sure the Polygon and Kotaku crowd has left this blog let's get down to brass tacks. You wouldn't walk into a sports bar and tell them to turn off the local baseball/basketball/football/hockey game in favor of a "safer" or more "diverse" sport like curling, well maybe in Canada you would, but I think you get the idea I'm tossing out there. Gaming is not perfect, but it's not your place to come in and tell us what is wrong about it. If you want to add your voice to the conversation then by all means pull up a chair and let's have a chat. However, if you want to come in and dictate what we should be playing, who should be allowed to make games, or what those game can feature then seriously GTFO! Seriously, stop playing the damn victim and just fucking treat us with the same respect you try to force everyone to give you. You want more females in gaming, well guess what dumbass? So do we! You think we hate women because you need us to hate women so you can bitch and moan about it while pitching your patreon and earning those victim bucks. Diversity? We have no issues with playing games featuring diverse cast as any gamer will tell you or you could find out yourself if you looked into gaming history and took note of all the damn non-white or non-male protagonist. Gamers are neither evil nor your enemy, we are simply a group of people who enjoy playing games and bullshitting with one another. We are not toxic, you are. Once you realize this then you will be having as much fun as we are when we are taking you out in Call of Duty. As always. feel free to comment, like, share, tweet, or whatever other thing you kids do on your social media these days.