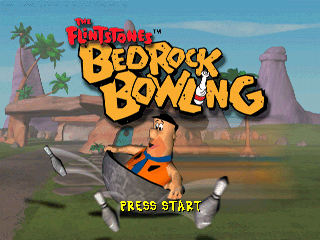 From the moment I laid my hands on a Family Computer, as the NES was called in the Philippines, controller as a little kid video games have been something of a constant in my life. While I don’t play as much nowadays, gaming still remains a comforting romp that I doubt would ever grow boring. With that in mind, it’s all too easy to look back at old gaming memories with rose-tinted glasses. This isn’t one of those times. Back around the time I was in Middle School, sometime around 2001 or so, I was given a PS1 title as a present, The Flintstones: Bedrock Bowling. Whether it came from a schoolmate or my parents, the exact details of how it landed on my lap escape me. Playing it, on the other hand, remains clear as day. Developed by Adrenalin Interactive Inc. in 2000 during an era when the term shovelware was nearly synonymous with licensed titles, especially those aimed at children , its reception was predictably mediocre. To this day I wonder what went into the mind of the developers, or perhaps more accurately the executives, who green lit this. After all, it doesn’t take a marketing guru to see that The Flintstones name wasn’t as popular with kids in the 2000s as it was in the 1960s. The two Razzie worthy Hollywood movies that came out by that point should have been another indication of just how far The Flintstones brand had fallen. 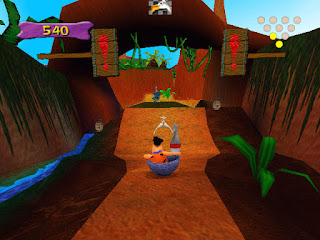 The first thing seen upon starting up Bedrock Bowling was an intro cinematic that wouldn’t be too out of place in the original cartoons. Looking back, it’s still surprising how the developers managed to get some of the original Hanna-Barbara cast with the game being the last role by the late Henry Corden as Fred Flintstone. Though, even back then, it seemed obvious where the budget went as the actual game looked and sounded hideous. The “lanes” themselves barely resembled what they’re supposed to be, riddled with ugly textures and world-dropping glitches. The tiny voice overs clashed with either bland music or, as in one level, screeching sound effects that for some reason didn’t stop. That the game could be finished in around 30 minutes would be a small mercy, if not for the controls being nigh unresponsive at the best of times. 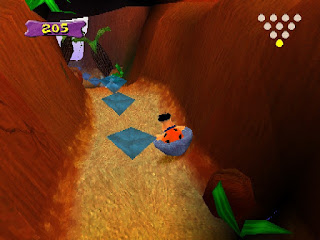 There’s also no actual bowling to be had, either. Instead, as briefly explained by the Great Kazoo in the intro, the game’s an obstacle-laden platformer where characters roll about horribly in oversized balls to hit pins, birds and gems. Which wasn’t helped by how the version I owned came with a bug wherein pushing a few buttons made it possible to skip through every single levels. Then, there’s the ending, which is little more than a half-baked “you win” screen and a brief farewell cutscene. That it felt like a ripoff to my young mind was an understatement, even considering I didn't pay for it since it was a gift. The game is long gone now, sold off in a garage sale years ago. Yet, that sad piece of rubbish still lingers in my memory, being one of the handful of PS1 games I had. And with footage of it readily available on YouTube, I doubt it’ll slide into oblivion any time soon. No, I think this game will be included in lists of worst games of all time alongside such infamous games as E.T. And Superman64. As always. feel free to comment, like, share, tweet, or whatever other thing you kids do on your social media these days.