D & D Is For White People: How Racism Kept Me From Playing Dungeons & Dragons

It was in early 1992 when I found out that Dungeons & Dragons was a tabletop RPG. A game played with your imagination and good friends. I had both of those in spades so of course I wanted to dive right in and play a game, but that when I learned a hard truth. D & D is for white people! Picture it, a young plucky Mexican boy with hope in his eye looking to play Dungeons & Dragons while a group of teenage white boys taunted and pushed him around. The white juvenile delinquents ripping up the Mexican boy's Monster Manual and tossing it into a puddle, spitting on him as they leave with a few racial slurs being tossed his way. I'd love to tell you that I was that young Mexican boy, except it's nothing more than fantasy. No, the truth is my Latino friends are the ones who informed me Dungeons and Dragons was for white people. It was my family that reinforced the notion that "geek" or "nerd" activities were things white people did, not anything a Mexican would take part in. 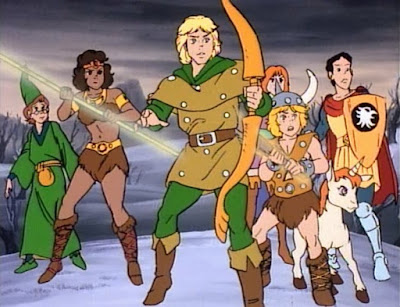 Twenty seven years later, I still haven't played a single table top game of Dungeons & Dragons. I have several Monster Manuals, the 3.5 Player's Handbook, and the official Bard, official Ranger, and official Thief Handbooks. I've spent hours watching others play Dungeons & Dragons on Twitch and YouTube. I've spent long nights creating my own campaigns, monsters, and scenarios. Yet, the words "Dungeons & Dragons is for White people" still rings in my ears and keeps me from seeking out a game. I've played plenty of fantasy games, loads of RPGs, and a table top game or two but a Dungeons & Dragons game still eludes me. Maybe one day I can get over the years of being told my interests were too white and I hope the Latinos growing up today can overcome the racism of our own people to actually enjoy things that interest them. The media likes to tell you it's White People who keep people like me from joining "their" activities, but in my life it was other Latinos who declared things like Dungeons & Dragons was for white people only.As always. feel free to comment, like, share, tweet, or whatever other thing you kids do on your social media these days.