The Guardians of the Galaxy 2: A Theory About Ego 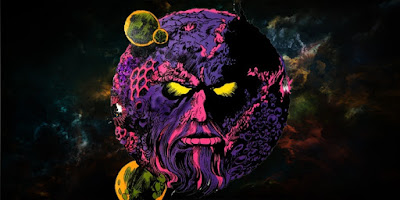 One of the biggest surprises for the sequel to Guardians of the Galaxy was the announcement of Ego the Living Planet being placed in the role of Starlord's father. As soon as that news hit the Internet, the theories as to how this would play out in the movie began to fly. Eventually we found out that Ego would have a human form, portrayed by none other than Kurt Russell. With the release of the second trailer for Guardians of the Galaxy 2 we finally got a glimpse of Ego's human form and that sent my mind into overdrive. I have a theory about Ego's MCU connections as well as his ultimate fate, but before we get into that I should give those of you who are not familiar with Ego a quick refresher course.

In the comic books, Ego is a living planet that has existed for millions of years in a remote area of the universe. Ego's origin has changed quite a bit since his debut in 1966 with his current origin being that he is a creation of the cosmic being known as The Stranger. Over the years Ego has flip flopped from hero to villain to neutral entity several times. Ego was almost consumed by the cosmic entity Galactus on two occasions, but both times he was rescued by heroes from Earth. Ego has complete control of his mass, changing the planet's environments at will, creating flora and fauna as he sees fit, and being able to move through space.

Now, I doubt that Ego's origin will involve The Stranger, since introducing another cosmic being to the MCU would make Thanos seem less important and grand. With that said, I believe Ego will be revealed to be related to, perhaps by a blood oath and not blood, The Collector and The Grandmaster. This will cement the idea of The Elders of the Univers in the MCU and since Ego was once considered a Elder of the Universe in the comic books this would not be too far a deviation from the source material. Giving Ego a connection to the Elders of the Universe will also make him a target for Thanos, since Thanos wants the Infinity Stones and The Collector has one, the Reality Stone AKA the Aether. So, it is my belief that we will see Thanos attack Ego and demand the location of The Collector, threatening the death of Starlord if Ego refuses to give Thanos the information. Ultimately Ego will divulge the location of The Collector in order to save his son, whom he grew attached to over the course of Guardians of the Galaxy 2, but Thanos, after being given the information he seeks, will boast how he will kill Starlord despite his promise to spare him, enraging Ego. Ego will then be killed by Thanos. With Ego's dying breath he will warn Starlord to stay away from Earth since Thanos will be heading there soon, but Starlord will decide to face Thanos and get revenge thus setting up how The Guardians of the Galaxy wind up in Avengers Infinity War. Well, that is my theory anyway, what do you guys think? As always. feel free to comment, like, share, tweet, or whatever other thing you kids do on your social media these days.