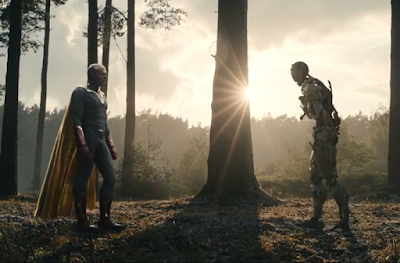 Once again we are back with a crazy Avengers Age of Ultron theory, this time I will be telling you why The Vision did not in fact kill Ultron at the end of the movie. First off, every major death in the MCU has been completely on screen and in your face. In Age of Ultron we see Quicksilver get gunned down, in Daredevil we see the piles of bodies The Punisher leaves behind, and in Jessica Jones we see Jessica walk over and snap the neck of The Purple Man. None of these deaths can be denied or seen as anything else. However, in Age of Ultron when The Vision "kills" Ultron the camera does something very odd...it pans out.

Now, one could argue that the death was off screen to maintain the Avengers no killing stance, letting the kids know that heroes do not kill and all that. However, during Ant-Man we clearly see Ant-Man cause the death of Darren Cross by causing Cross' suit to malfunction and implode with Darren still inside so that nullifies that argument. We also can eliminate any arguments against seeing a bloody death scene out due to Ultron being a robot. So, where does that leave us? Well, we know that The Vision considers himself a force of life as opposed to Ultron's force of death so killing Ultron would not be in character for Vision. Add to the fact that The Vision clearly states he doesn't want to kill Ultron because Ultron is unique. Add in to the fact that Ultron used part of his own programming to create Vision and we have a robot that is not just created by Ultron but a part of him. In the comics it is this "piece" of Ultron inside of The Vision that not only prevents The Vision from destroying Ultron but makes him try to restore him should Ultron ever fall. So, if I don't think Ultron was killed by The Vision, what do I think?

Simple, he allowed his body to be disintegrated while his mind was absorbed into the Mind Stone. It is through the Mind Stone that Ultron will come back and inadvertently allow Thanos to acquire the last Infinity Stone during Avengers Infinity War Part 1. You see, inside The Vision there will be a nagging at the back of his mind which is Ultron telling him to build another body and release Ultron once again. Ultimately I believe that Ultron being inside The Mind Stone will also be how The Avengers defeat Thanos, since Ultron would not want to serve a flesh bag like Thanos and thus from inside The Infinity Gauntlet he will bring Thanos down. So, what do you guys think? Is Ultron done for good? Will The Vision resurrect Ultron? Is the Vision trying to rehabilitate Ultron with the Mind Stone? As always. feel free to comment, like, share, tweet, or whatever other thing you kids do on your social media these days.
*All images are owned by their respective copyright holders and are used under fair use guidelines.